Facts in the Case of M. Valdemar 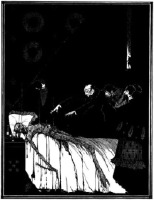 The December 1845 edition of the American Whig Review contained an account of an unusual experiment designed to test whether hypnotism could delay the arrival of death. According to the article, a terminally ill patient, M. Ernest Valdemar, who only had hours left to live, was placed in a trance by a hypnotist. The effect was quite remarkable. Valdemar appeared to go into a state of suspended animation, moving only in response to the hypnotist's commands. He remained in this state for over a day, much to the surprise of his doctors who hadn't given him that long to live. Then Valdemar's pulse stopped and his breathing ceased. He was dead, but his brain remained alive, bound to the will of the hypnotist. Valdemar could gurgle out brief responses to questions.

For seven months Valdemar remained in this condition, halfway between death and life, until finally the doctors agreed the trial had gone on long enough. The hypnotist gave the command for the patient to wake from the trance. As he did so the man's body immediately collapsed inwards, disintegrating into a puddle of "detestable putridity."

The account of this experiment was widely reprinted both in America and in Europe. A prominent Boston hypnotist, Robert Collyer, declared that he had no doubt of the truth of the case, since he himself had once brought a man back to life who had died from overdrinking.