The Donation of Constantine

The Donation of Constantine was a document supposedly written by emperor Constantine (285-337 A.D.) granting the Catholic Church ownership of vast territories within the western Roman Empire. The document stated that he made this generous gift out of gratitude to Pope Sylvester I who had converted him to Christianity and had cured him of leprosy. For centuries the Donation legitimated the Church's possession of the papal lands in Italy. Unfortunately, the Donation was entirely fake, as even the Church eventually acknowledged. 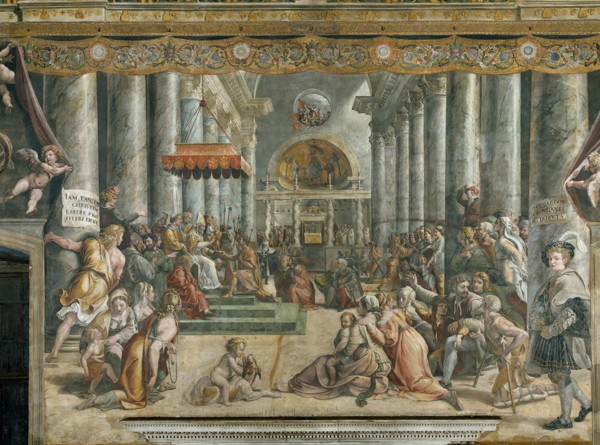 Pope Sylvester receiving the donation from Emperor Constantine
Painting by the School of Raphael, commissioned by Pope Leo X in 1517
The truth is that the Church only officially acquired the papal lands in 756 A.D. when King Pepin of the Frankish Empire gave them to the Church as a gift. 756 A.D. also appears to be the time when the text of the Donation first appeared. It was probably created by a cleric either in Rome or the Frankish court. Its purpose may have been to allow the King to claim that he was returning, not giving, the papal lands to the Church. In this way, the fiction of the Donation added legitimacy to a convenient political marriage between the Catholic Church and the Frankish state.

The Donation was not revealed to be a forgery until 1440. In that year Lorenzo Valla published his Discourse on the Forgery of the Alleged Donation of Constantine, in which he enumerated the large number of historical anachronisms that pervaded the work. For instance, it referred to Byzantia as a province when in the fourth century it was only a city, it referred to temples in Rome that did not yet exist, and it referred to 'Judea' even though in Constantine's time the Romans referred to this territory as 'Palestina.' Valla could have added that emperor Constantine never had leprosy, making it impossible for Pope Sylvester to have cured him of this disease.

The Catholic Church suppressed Valla's work for years. Centuries later, it publicly conceded that the Donation was a fake.