The Death of Alan Abel 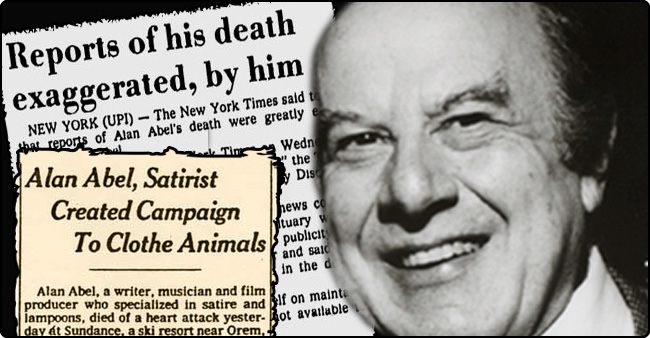 On January 2, 1980, both the New York Times and the New York Daily News reported the death of the famous media hoaxer Alan Abel. The Times provided a flattering account of Abel's career that read, in part:


Alan Abel, a writer, musician and film producer who specialized in satire and lampoons, died of a heart attack yesterday at Sundance, a ski resort near Orem, Utah, while investigating a location for a new film. He was 50 years old and lived in Manhattan and Westport, Conn.

Mr. Abel, a graduate of Ohio State University with majors in music and speech, made a point in his work of challenging the obvious and uttering the outrageous. He gained national recognition several years ago when he mounted a campaign for animal decency, demanding that horses and dogs, for example, be fitted with underwear.
Unfortunately for these papers, there was a small problem. Abel was very much alive.

They learned this when Abel held a press conference the next day in which he revealed that the news of his death was a hoax engineered by himself and a team of twelve accomplices, some of whom had sent the false story to the media while others had acted to confirm it.

Abel explained that he perpetrated the hoax for publicity, specifically to publicize the fact that he was a "professional hoaxer."

However, Abel's plan didn't go entirely smoothly. He later admitted that he had hoped to make his grand return to life at his memorial service. However, he said, after seeing his obituary "the bank froze the account I'd set up for my memorial service. They wouldn't let me draw it out. They said I was an imposter." Similarly, Diners Club canceled his credit.

Reportedly the editor of the Times was so mad at the deception, that he vowed to never print Abel's name again. However, if this is true, it was a vow the editor was unable to keep. The Times reported on Abel again in 1985, when he arranged for audience members at a talk show to stage a "mass fainting."

Abel also claimed that a Times reporter subsequently called him. When Abel asked, "What can I do for you?" the reporter responded, "Drop dead."

Abel also noted, "Now, when I really die, I'm afraid no one will believe it."

With the rise of social media in the 21st Century, celebrity death hoaxes have become very common. But Abel's 1980 death hoax is one of the very few (perhaps only?) examples of a celebrity creating a death hoax about himself.
Death Hoaxes of the 1980s Journalists Hoaxed Alan Abel
Tweet

New York Times didn't do its job of checking up on which that Alan Abel had died. It's too easy for media outlets to be first with the story without checking the facts only to have egg on their faces to find out it was false.
Posted by Stephen A. Fletcher  on  Mon Oct 12, 2015  at  10:32 PM
One would infer that what the Grey Lady was *really* mad about was that they'd been meta-suckered by a guy who openly told people he was a hoaxster.

In reality it was totally their own fault, no question -- if you *know* the guy's fame is for hoaxes, you should also have the brights to realize that mere standard due diligence is clearly not enough. You verify, re-verify, then re-re-verify again. And *then* you send somebody to the guy's neighborhood to poke around his house to be sure. Classic case of venting your anger in entirely the wrong direction.