Mattel was at a loss to explain how one of its Ken dolls showed up on a store shelf dressed in a purple tank top, lace apron, and polka-dotted skirt. 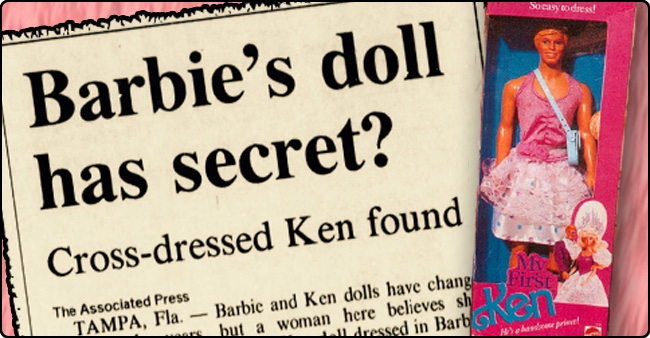 In July 1990 Carina Guillot and her 12-year-old daughter, Jocelyn, were visiting relatives in Florida when they wandered into a Toys 'R' Us store and spotted something very unusual. Standing inside a sealed cardboard package among the ranks of Ken dolls dressed in their standard-issue outfits was a Ken decked out in a purple tank top and sporting a lace apron on top of a polka-dotted skirt. Mrs. Guillot immediately thought, "Oh my God, now we have a crossed-dressed Ken."

Being avid collectors of Ken and Barbie dolls, Carina and Jocelyn Guillot knew that this was no run-of-the-mill Ken. They immediately took the doll up to the front of the store where the employees examined it and confirmed that the packaging and seal were intact. This appeared to be a valid, untampered Mattel product. The Guillots bought the doll and took it home.

Within days, news of the cross-dressing Ken had reached the national media. It was featured in national newspapers, on the radio, and on TV programs such as the Arsenio Hall show and the Joan Rivers show. Mattel was at a loss to explain how this one doll had managed to break ranks. Pundits jokingly theorized that Ken had finally gotten sick of living in Barbie's shadow and had come out of the closet once and for all.

The Ken frenzy reached a peak when a collector offered the Guillots $2,000 for the doll, which was a significant mark-up from the $8.99 they had paid a few days before. Reportedly someone else then bid $4,000. The Guillots turned the offers down.

The speculation finally came to an end when a Toys 'R' Us night clerk, Ron Zero, admitted he had dressed up the Ken doll as a prank and had then carefully resealed the package with white paper glue. "We always did crazy things like that," Zero claimed. "We'd hang dolls in the aisle or put Ken and Barbie in the Barbie house with Barbie spanking Ken." Toys 'R' Us fired Zero four days after he confessed.
Links and References
Pranks Hoaxes of the 1990s Gender Fakers
Tweet

I bet that family really wished they had taken the money after the confession!! :D
Posted by Dawn  on  Sun Jan 09, 2005  at  07:21 AM
People are incredibly ignorant. Cross dressing is not a fact, it's a strategy to prevent men changing. Women changed! They previously were banned from wearing pants! In 1943 in Chicago, Evelyn Bross was arrested for wearing pants in public and Judge Jacob Braude ordered her to see a psychiatrist for six months. Fancy garments historically are royalty, nobility, aristocrats, upper class, wealthy---not "female." You can't call skirts female, they're leg garments. You can't open the door to let women wear everything and paint men into a corner. If a man is presenting as a woman, successfully or not quite, the description is "female impersonator." So many men in modern countries still wear traditional skirts this IGNORANT woman wouldn't believe---Greece, Albania, Ireland, Spain, Scotland, Portugal, Bhutan, India, Turkey, Iran, Iraq, Egypt, Saudi Arabia, Fiji, Tonga, Tahiti, Samoa and more.
Posted by Charlie  on  Thu Jun 07, 2018  at  02:27 PM