After a heavy snowfall, the footprints of a large animal were found on the campus of Cornell University, leading up to the shore of the frozen Beebe Lake. A hole in the ice indicated that the animal must have fallen in and drowned. A zoologist examined the tracks and identified them as those of a rhinoceros. 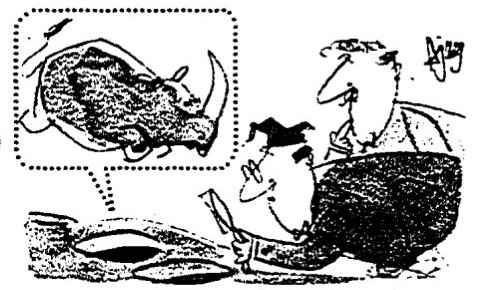 Word of the rogue rhinoceros spread around town. Supposedly a local reporter got wind of the story and ran a report under the headline, "Rhinoceros Drowns In Beebe Lake." Since the University got its water supply from the lake, many students declared they were no longer going to drink the water. Many of those who did drink it swore they could taste rhinoceros.

The tracks turned out to be the work of Cornell student Hugh Troy. He and a friend had borrowed a rhino-foot wastepaper basket from the office of Professor Louis Agassiz Fuertes, a well-traveled ornithologist who taught at Cornell from 1923 to 1927. The two students weighted down the rhino foot with scrap metal then attached it to a 30-foot clothesline. Holding the clothesline at either end, they made their way across campus, creating a trail of tracks in the snow up to the edge of the lake.

The rhinoceros footprints are one of the most famous pranks in Cornell's history. However, there's no documentation to prove that the prank happened. It may be that Hugh Troy invented the tale later in his life to embellish his reputation as a prankster. 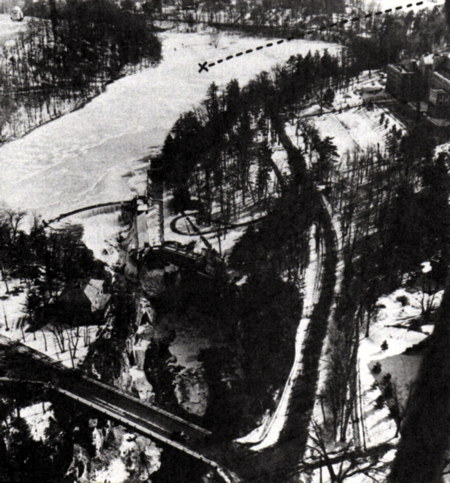 Aerial view of Beebe Lake, showing the likely path of the rhino
From Laugh with Hugh Troy (1983) 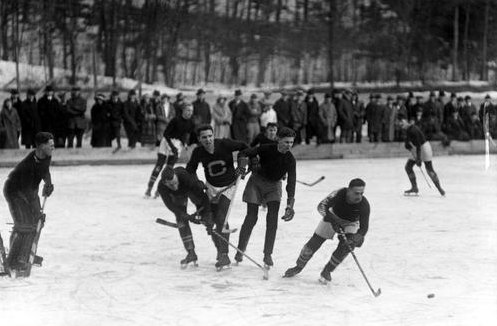