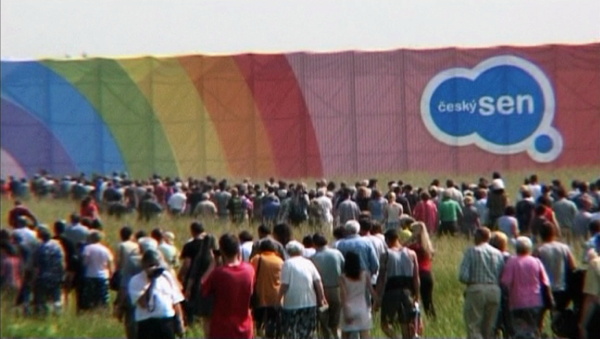 In early 2003 advertisements began to appear throughout Prague promoting a new hypermarket called Cesky Sen ("Czech Dream") opening soon in the Lethany Fairgrounds. The ads appeared on billboards, at bus stops, in newspapers, and on TV. The store promised ultra-low prices, such as TVs for $19 and mineral water for pennies, and a special surprise for anyone who came to the grand opening on May 31, 2003.

On the day of the grand opening, hundreds of eager consumers parked their cars at the Lethany Fairgrounds and approached the store. They could see its bright colors in the distance. Shopping bags in hand, they ran across the fairgrounds, only to find... nothing but a giant 26x260 foot Cesky-Sen banner. This was the special surprise.

In fact, there was no hypermarket, nor plans to build one. Student filmmakers Vit Klusak and Filip Remunda had set out to record what would happen when consumer's expectations collided with reality. With the help of a grant from the Czech Ministry of Culture they had hired an ad agency to launch a massive marketing blitz to promote a non-existent, too-good-to-be-true store. 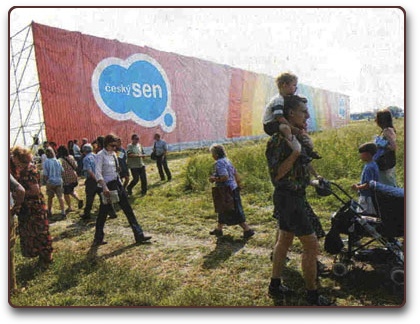 The Reaction
As an angry, confused crowd grew in front of the Cesky Sen banner, Klusak and Remunda got on a stage to explain their project. Some people laughed; others booed and shouted curses at the filmmakers. A few kids threw rocks at the Cesky Sen sign. But the filmmakers were prepared for this and started playing music through speakers to calm the crowd. Eventually most people shrugged and went home.

Klusak and Remunda's point was that advertisers play with our expectations all the time, raising them with big promises only to let us down by delivering nothing. What Klusak and Remunda did was no different, except they put themselves on a stage where people could throw rocks at them.
Links and References
Advertising Hoaxes Hoaxes of the 21st Century
Tweet