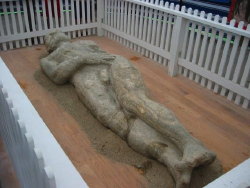 The Cardiff Giant on display in the Farmer's Museum, Cooperstown, New York.
The Cardiff Giant, a gigantic ten-foot tall stone man, emerged out of the ground and into American life on October 16, 1869, when he was discovered by some workers digging a well behind the barn of William C. "Stub" Newell in Cardiff, New York. Word of his presence quickly spread, and soon thousands of people were making the journey out to Stub Newell's farm to see the colossus. Even when Newell began charging fifty cents a head to have a look at it, people still kept coming.

Speculation ran rampant over what the giant might be. The central debate was between those who thought it was a petrified man and those who believed it to be an ancient statue. The 'petrifactionists' theorized that it was one of the giants mentioned in the Bible, Genesis 6:4, where it says, "There were giants in the earth in those days." Those who promoted the statue theory followed the lead of Dr. John F. Boynton, who speculated that a Jesuit missionary had carved it sometime during the seventeenth century to impress the local indians.

A sketch of the Giant made in 1869 as it lay on display in Cardiff, New York.
The truth was somewhat more prosaic. It was actually the creation of an enterprising New York tobacconist named George Hull. The idea of burying a stone giant in the ground occurred to him after he got into an argument with a methodist Reverend about whether the Bible should be taken literally. Hull, an atheist, didn't think it should. But the Reverend disagreed. The Reverend insisted that even the passage where it says 'there were giants in the earth in those days' should be read as a literal fact. According to Hull, after this discussion he immediately "thought of making a stone, and passing it off as a petrified man." He figured he could not only use the fake giant to poke fun at Biblical literalists, but also make some money.

Hull's idea turned out to be a stroke of genius. The entire venture cost him over $2,600 (all done with the collusion of the farmer Newell and the stonecutters who carved the giant), but the gamble paid off when a group of businessmen paid $37,500 to buy the giant and move it to Syracuse, where it could be more prominently exhibited.

In Syracuse the giant came under closer scrutiny. Othniel C. Marsh, a paleontologist from Yale, paid it a visit and declared it to be a clumsy fake. He pointed out that chisel marks were still plainly visible on it. These should have worn away if the giant had been in the ground for any appreciable length of time. Sensing that the game was up (and having already cashed out), Hull confessed. But the public didn't seem to care that it was fake. They kept coming to see it anyway. They even began referring to it affectionately as 'Old Hoaxey.'

Alex Boese (left) and Marvin Yagoda (right) in front of Barnum's fake replica of the Cardiff Giant. July 2005.
Recognizing the giant's popularity, the great showman P.T. Barnum offered the new owners $60,000 for a three-month lease of it. When his offer was refused, he paid an artist to build an exact plaster replica of it, which he then put on display in his museum in New York City. Soon the replica was drawing larger crowds than the original. This competition prompted the owners of the giant to file a lawsuit against Barnum, but the judge refused to hear their case unless the 'genuineness' of the orignal could be proven. Sheepishly they dropped their charges. What is believed to be Barnum's replica of the giant is currently on display in Marvin's Marvelous Mechanical Museum, located outside of Detroit. (Note: Marvin's Museum is well worth a visit if you're ever in the Detroit area. It also hosts an amazing collection of coin-operated mechanical oddities).

Many have declared the Cardiff Giant to be the greatest hoax of all time. Whether or not this is the case, its huge size and mysterious presence certainly tapped into some strange element of the post-Civil War American psyche. Although the massive public interest in the giant gradually died down, it remained popular. Even today people still make the journey to visit it at its permanent home in the Farmer's Museum in Cooperstown, New York (down the road from the Baseball Hall of Fame).

The Giant That Fooled the World
...the incredible tale of history's weirdest hoax

When George Hull left his weed-choked, debt-ridden tobacco farm outside Binghamton, N.Y., and headed west in 1868 to seek better fortune, he thought maybe he'd go prospecting for gold. But he never reached gold country. On the way, 90 years ago, he stumbled on something more precious than the yellow metal: human gullibility.

The result was one of the most successful scientific hoaxes in history. On a total investment that probably didn't top $4000, Hull netted a profit estimated at $30,000 to $60,000 -- a small fortune in those days.

Hull's hoax was the famous Cardiff Giant -- a 12-foot statue of a man, secretly made, secretly buried, and then "discovered." Hull had a fabulous double-barreled lie to go with it: It was either a petrified man or an ancient statue -- take your choice. Not only the general public, but many learned men, paid to see it and swallowed it whole.

IDEA. Wandering west to seek his fortune, George Hull stopped at Ackley, Iowa, to visit his sister. One night a clergyman dropped in, talked about giants who once strode the earth. Hull argued there were no such giants, then fell silent. The Big Idea had hit him. People would believe anything, he thought...

RAW MATERIAL. Hull had heard of petrified trees. Why not a petrified man -- a giant, aged to stone in his tomb? Near an Iowa railroad construction site, he found beds of gypsum, a soft limy rock. He paid a grading crew one keg of beer to quarry out a mammoth 12-by-4-by-2-foot block.

TRANSPORT. The block weighed some three tons. Hull had it wrapped in canvas and hoisted onto a dray. It took three weeks to move it 40 miles to the nearest railhead. Two wagons and a bridge broke under the weight. Hull cut off a ton, told bystanders the stone was for a monument.

SCULPTURE. Hull confided his scheme to Chicago stonecutter Edward Burkhardt, had the block hauled into an empty barn Burkhardt owned. With two assistants, Burkhardt began hacking the gypsum into the figure of a 12-foot-tall man who had died in agony. The face was a likeness of Hull's.

FINISHING TOUCHES. To simulate pores in the giant's skin, Hull made special hammers by setting needles in lead bases. To make him look antique, the stonecutters rubbed him with sand, water, ink, and sulfuric acid. By unexpected luck, veinlike lines appeared in the gypsum.

SETTING THE BAIT. In Cardiff, N.Y., a relative of Hull's, William Newell, had a farm. For a fourth interest, he agreed to have the giant buried there. In November, 1868, Hull, Newell and two friends lowered the 2990-pound colossus into his tomb, carefully filled it over.

SPRINGING THE TRAP. Hull waited a year until all talk of his mysterious wagon cargo was forgotten. Then, in October, 1869, Newell hired two neighbors to help him dig a well -- pointing out just where they should start. The point of a shovel hit something. The hoax was on.

LAST HURDLE. Hull's one worry was that scientists would spot the hoax, but to his delight they were awestruck. They came from universities and museums far and wide. They didn't go for the "petrified man," but called the giant an ancient statue. Hull told Newell to bill it as such to the public.

IN THE MONEY. Huge crowds came to see the giant. Newell fenced off the area, hired a barker, charged 50-cents admission. Hull refused one $10,000 offer for his "find," finally sold a part interest to Syracuse businessmen for $30,000. The giant was exhibited in Boston and elsewhere.

TROUBLE BEGINS. Showman Phineas T. Barnum offered a huge sum, reportedly over $50,000, for a share. Newell turned him down. Barnum then had his own giant made of papier-mache, exhibited it in New York, offered a $1,000 reward to anyone who proved his less genuine than Hull's.

THE END. Hull finally sold his giant to a carnival. He was a rich man. But by 1873 he was flat broke again, a result of bad investments. He tried to repeat his great hoax with another giant "discovered" in Colorado, but this second hoax never got off the ground. Hull went to England... and oblivion.
Cardiff Giant Haiku (Submitted by Hoax Museum visitors)