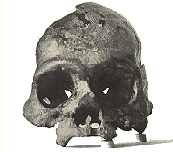 Front view of the Calaveras Skull
On February 25, 1866, workers found a human skull buried deep inside a mine on Bald Mountain in Calaveras County, California. The skull was located 130 feet below the surface, beneath a layer of lava. The owner of the mine, James Mattison, gave the skull to a merchant who in turn passed it on to a local physician until it eventually found its way into the possession of J.D. Whitney, the State Geologist of California and Professor of Geology at Harvard University. Whitney determined that the skull belonged to a Pliocene age man. This made it the oldest known record of human existence in North America. It also suggested that humans had lived in the Americas far longer than previously thought, perhaps as long as they had lived in Europe.

It took many years before the skull was decisively determined to be a fake. The skull was simply too modern in character to be from the Pliocene age. In addition, the sediment attached to it was not from the mine deposit, indicating it had been planted. The skull was probably planted by miners playing a practical joke.


Doubts
As early as 1869, a San Francisco newspaper declared, "We believe the whole story worthy of no scientific credence... a minister... told us that the miners freely told him that they purposely got up the whole affair as a joke on Professor Whitney."

Smithsonian scientist W.H. Holmes pointed out that the sediment found with the skull was of a modern type. The skull itself also looked modern. In addition, many scientists were disturbed by the fact that a qualified researcher had not had a chance to examine the skull in situ.


The Hoax Exposed
Despite the doubts expressed about the skull, Whitney continued to believe it was genuine. He was eventually replaced at Harvard by F.W. Putnam, who also argued for the skull's authenticity.

By the 1890s the skull was still accepted as genuine by the academic community, but it was becoming obvious that it did not fit into the growing fossil record of man's evolution. So in 1901 Putnam decided to determine, once and for all, whether the skull was authentic.

While in California he did some research and learned that in 1865 a number of Indian skulls had been dug up from a nearby Indian burial site. One of these skulls had been planted in the Bald Mountain mine so that workers would later find it. Despite hearing this story, Putnam was still not ready to declare the skull a fake. Instead he simply conceded that "It may be impossible ever to determine to the satisfaction of the archaeologist the place where the skull was actually found."

It now seems clear that neither the skull found in the mine, nor the skull acquired by Whitney, were genuine ancient skulls. The skulls were simply too modern in character to be from the Pliocene age, and in addition, the sediment attached to them was not from the mine deposit, indicating that they had been planted.

Historian Ralph Dexter concludes, "The desire on the part of miners to play a practical joke, the anxiety of archaeologists to prove the existence of early humankind in North America, the firm convictions and good faith of those involved in an honest mistake, and the confusion resulting from a mix-up of skulls, led to this long drawn-out controversy, unique in the annals of American archaeology."
Links and References
Science Paleontology Scientific Fraud 19th-Century Hoaxes (1850-1900)
Tweet

Wow, I have read quite a bit about this and your statement; 'The skull was to modern in character to be from the Plieocene Age', says it all. If it doeasn't fit your theories, and I remind you they are just theories, then they can't be right. It is time for Darwinism to be thrown in the dust heap of failed human theories. This based on not just this evidence but on the many anomolies that do not fit. It is a well known fact that 90% of what we think we know will be overturned by the next generation. This has been proven over and over again and for 'professionals' to ignore and cherry pick evidence is not science but another case of covering their asses.
Posted by Byron Shutt  on  Thu Jan 05, 2012  at  05:26 PM
The psychopaths that have been running the show, have their "story". If something or someone challenges that, they simply eliminate "it" or "you".
99 percent of the stuff they tell us is B.S.
Where is the scull now?
I'm sure those miners wanted a bunch more people up there in
the Gold Country @ the time, & therefore, made-it-up. Right...

Posted by kymberle  on  Thu Dec 13, 2012  at  11:42 AM
who would trust anything the smithsonian says
Posted by bill  on  Mon Mar 11, 2013  at  04:50 PM
I have no idea as to whether the skull is real or not, but your article is unconvincing and not very believable. The who premise is that it was a practical joke on Professor Whitney, but what kind of practical joke would take such a circular route as this one? The miners "find" it, give it to the owner and then it gradually makes it's way to the Professor?

Then they don't say anything for years? Where's the ha-ha, the hearty laughter followed with "April Fool's" or "We got you good this time"? Did the miners even know the Professor? Did they know him well enough to play a joke on him? Usually you play jokes on good friends, or people you hate, where did Professor Whitney fit in this picture?

I'll buy that that somewhere the skulls may have been confused, switched, whatever; wouldn't be the first time. But the original story sounds closer to the truth than the one your article is trying to turn it into.

Once upon a time, some miners were surprised when they found a skull where one shouldn't be. They told the boss, who looked for someone who might have some answers, i.e. the Professor. Makes sense, sounds right , don't you think?
Posted by Walter Hirsch  on  Fri Apr 15, 2016  at  10:05 PM
does anyone know where the Calaveras Skull is located currently?
Posted by tony  on  Sat Apr 16, 2016  at  09:29 AM
Living in the area where the skulls were supposedly found, I too developed an interest in them. Many years ago I read a newspaper article that said they were shipped to a museum in Nevada.