Harry Reichenbach (1882-1931) was a publicist whose career spanned the early twentieth century. He was responsible for promoting many movies and show business personalities. In his autobiography, Phantom Fame (written with the help of David Freedman), Reichenbach described a publicity stunt he devised early in his career that has since become a classic example of inventive (though misleading) low-budget promotion. It involved a creature called the "Brazilian Invisible Fish." He wrote:


Some years later I saved a declining lunchroom for an old ex-circus woman by a curious little device. She had to attract a crowd but couldn't afford to spend any money. I told her to place a large, transparent bowl filled with water in the window of her store. Beside the bowl I set up a cardboard sign reading, "The only living Brazilian invisible fish."

People soon gathered to behold this wonder and some swore they could detect the invisible fish making the water move. This suggested an improvement on the idea. I placed a little electric fan in one corner shielded from the onlookers and this blew ripples on the water. After that the crowds couldn't be controlled. "You see it? There it goes! There! No, there!" People vied with each other to point out the fish, and the restaurant that featured such an oddity soon got trade as well. But the prosperity didn't last, because the old ex-circus woman eventually tried to serve the invisible fish as a course.
Authorship
Although Reichenbach claimed to have invented the "invisible fish" stunt, he almost certainly did not. It was most likely an old sideshow stunt that he knew about and took credit for.

Over the years, the same stunt has been attributed to many other people. For instance, the Broadway showman Florenz Ziegfeld Jr. (1867-1932), who produced the Ziegfeld Follies, also has been given credit for it.

In 1928, three years before Reichenbach published his autobiography, the following short anecdote describing the stunt (and attributing it to an unnamed New York City restaurant owner) ran in many papers:


Not long ago a bright young man, having opened a new cafe in 44th street, tried to think up schemes for bringing the crowds to his door. So he invested in a goldfish bowl. He filled the bowl with water and printed a sign reading "Invisible fish from South America." Soon the street outside his window was cluttered with New Yorkers trying to see the "invisible fish." On several occasions the police had to be called in to clear the sidewalk. Innumerable ideas were generated by the crowd for bringing the "invisible fish" into view. And several men actually claimed to have seen it through a magnifying glass.

Which, again, merely goes to show...
In the decades following the 1930s, "invisible fish" continued to be a popular stunt to draw crowds, especially at fairs and as a promotional device in store windows. In 1940, as an April Fool's Day prank, radio comedian Don McNeill set up an empty aquarium in the lobby of Chicago's Merchandise Mart with a sign in front of it: "Invisible Peruvian Fish." The stunt was once featured on Allan Funt's television show Candid Camera. A hidden camera recorded the reactions of people as they tried to spot the invisible fish supposedly swimming in a fish tank. And in 1950 the cartoonist Merril Blosser featured the joke in his comic strip "Freckles and his Friends." 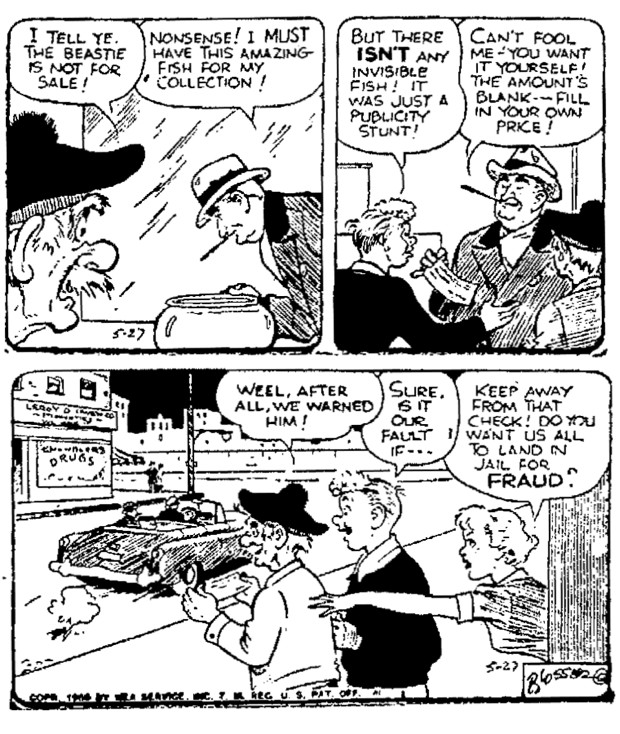 Real Invisible Fish
There are, in actuality, species of near-invisible fish. Or rather, transparent fish. For instance, in 1960 Dr. Leonard P. Schultz, the Smithsonian Institution's curator of fishes, published a report in which he described the marine life around the Marshall and Marinas Islands. In this report, he described a species called "sand divers," which spend their lives in the loose sand at the sea bottom. He wrote that they are hard to spot because only their eyes can readily be seen, their bodies being as transparent as glass.
Links and References
Advertising Hoaxes Animals
Tweet

I remember a classic "Nancy" cartoon having to do with "invisible goldfish."

If there are any invisible fishes in the real world, they probably have yet to be discovered (which isn't surprising, when you think about it).

However, the newborn larvae or fry of many fish species (especially marine fishes, which tend to have a pelagic/planktonic stage) are not only translucent, but also small enough that they are difficult to see with the unaided eye.

(The other day, a friend was telling a third person about a brood of baby fish in my aquarium, and I overheard her saying, "They're growing fast-- they're big enough now that Gary is no longer the only person who can see them.")

There are also a number of fish species in which the adults are more or less transparent. These include the Glass Fishes (genera Ambassis and Chanda, for example), several small rasboras (family Cyprinidae), and various others. One of the most nearly transparent I've seen is the Glass Catfish of souteast Asia, Kryptopterus bicirrhis (and several related species, although bicirrhis is probably the least colored). It is a fairly popular pet fish for aquariums. Kryptopterus bicirrhis has normally-colored eyes and some pigment in the head. Most of the internal organs (stomach, intestines, gonads, etc.) are contained in a small silvery sac just behind the head. The middle and rear of the rather elongate body are almost completely transparent, except for a thin line (the fish's spinal column) and some hairlines representing its ribs. Its skin, flesh, and blood are almost invisible. You can hold a newspaper behind a Glass Catfish and read the text through its body.
Here is a link to an article with pictures:

There are also "chameleon" fishes which can camouflage themselves by copying the color of their backgrounds to the point of being virtually invisible. Many of the flatfishes, such as flounders and soles, are very good at this:

I think you must be the only other person I know who actually owns a copy of Phantom Fame, by the way.
Posted by Cranky Media Guy  on  Thu Nov 08, 2007  at  05:53 PM
Sadly, I don't actually own a copy of Phantom Fame. I'm reading a library copy. I've looked into buying it, but the cheapest copies I can find are almost $100. My wife doesn't let me spend that much on books -- especially ones I can get from the library.
Posted by The Curator  in  San Diego  on  Thu Nov 08, 2007  at  09:00 PM
Yeah, I saw copies of it going for that kind of bread, too. I wasn't about to spend that much for it. If I remember, the Library of Congress' copy was missing, so I couldn't read it there.

I bided my time and eventually I found a copy at a reasonable price, at ABEbooks.com, I think. You tell them what book you're looking for and if they don't have it on hand, they send you an email when they DO get a copy.

I don't work for them, it's just a way to find a rare book you're looking for; there are other similar websites.
Posted by Cranky Media Guy  on  Fri Nov 09, 2007  at  01:27 AM
The problem with a truly transparent animal is 2-fold.
First, it cannot have eyes, as eyes contain a layer of pigmented cells (the retina), and without this pigment, they will not work as eyes.
Second, nerve cells cannot be made invisible, as the myelin sheath that some are coated in is a fat, and appears white.

There are some octopie that are almost completely transparent, as well as some jellyfish, though
Posted by cthelmax  on  Fri Nov 09, 2007  at  01:57 AM
I know it's not quite what you're asking for, but there are ways other than transparency that fish use to achieve (near-) invisibility. Many deep-sea species are red, for example, and because there is no red light at the depths in which they live they are effectively invisible. Not much cop in a shop window I guess though!

Another brace of tricks: deep-sea hatchetfish have highly silvered sides that make them disappear when viewed from the side. From below, they can also hide their silhouettes: they have photophores that emit light at the same wavelength as the residual sunlight from above, which again makes them almost completely invisible.

There was footage of all of these disappearing tricks in the Blue Planet documentary, and assuming it wasn't doctored they're pretty astonishingly effective.
Posted by outeast  on  Fri Nov 09, 2007  at  02:15 AM
I know all about abebooks.com. I've been a regular customer at that site for at least six or seven years, and spent quite a bit of money through them. But I've also found some incredible bargains there.
Posted by The Curator  in  San Diego  on  Fri Nov 09, 2007  at  02:07 PM
I went to a pet store not too long ago and they had some sort of semi-invisible fish. The skin was almost completely translucent and you could see the bones inside the fish.
Posted by Sakano  in  Ohio  on  Sat Nov 10, 2007  at  08:28 AM
Sakano, the fish you saw in a pet store were almost certainly either glassfish (Ambassis, Chanda, Parambassis, or their relatives) or glass catfish (Kryptopterus; see description above).

Some pet stores have a barbaric mutilation of glassfish and sometimes other species in which the fish have been injected with flourescent dye. This dying is done by poorly-paid women workers in sweatshops in Asia. The process often kills the fish (they sell the survivors) and even more often infects them with various diseases (they use the same needle for many individual fish). Even if the fish survives long-term, the dye will soon fade. Don't buy any dyed fish! If you want brightly-colored fish, there are plenty of species with naturally brilliant colors.
Posted by Big Gary, MoHDCiCoF  on  Sat Nov 10, 2007  at  11:12 AM
Another interesting thing about glass catfishes and other transparent species is that if you shine a light through them from behind at certain angles, they act as living prisms, transmitting little rainbows to the obeserver's eye. Truly fascinating creatures.
Posted by Big Gary, MoHDCiCoF  on  Sat Nov 10, 2007  at  11:16 AM
Big Gary, I remember seeing examples of those fish in schoolbooks when I was in high school. If I remember right, the belief in the biology circles was that even though you could see parts of the inside, it still made it harder for predators to see them. I've got an invisible Martian for sale if you want, cost is negotiable. But no refunds.
Posted by Christopher Cole  on  Sat Nov 10, 2007  at  06:37 PM