The Awful Disclosures of Maria Monk 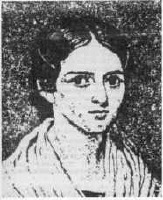 Maria Monk's Awful Disclosures was first published in January, 1836. In it, Monk exposed various scandalous events that, according to her, had occurred at the Hotel Dieu convent in Montreal. She claimed convent nuns were having sexual relations with priests from the neighboring seminary who supposedly entered the convent through a secret tunnel. All babies born of these illicit encounters, Monk claimed, were baptized before being strangled and dumped in a lime pit in the basement of the convent. Maria Monk said she had lived in the convent for a total of seven years before becoming pregnant by a priest. Unable to bear the thought of having her child killed and dumped in the basement, she finally fled.

The publication of Maria Monk's Awful Disclosures caused an enormous public outcry that fed on the widespread anti-Catholic sentiment of the era. Leading protestants in New York and Montreal demanded an investigation of the convent, to which demand the Bishop of Montreal eventually acquiesced. It turned up no evidence to support Maria Monk's claims, but American Protestants refused to accept these results, claiming the investigation was biased because it had supposedly been conducted by Jesuits disguised as Protestants.

A New York City newspaper editor, Col. William Leete Stone, asked the Bishop for permission to investigate with a team of protestants. The bishop granted his request, and in October 1836 Stone led a team around the convent. With Maria Monk's book in hand, he compared her description of the convent's interior with the convent itself. He found very little correspondence between the two. However he was not allowed to see the nun's rooms or the basement area and had to return to New York City, his investigation unfinished.

Col. Stone later obtained permission to see the entire convent and, on the basis of this fuller investigation, concluded there was no evidence Maria Monk "had ever been within the walls of the cloister."

With her claims discredited, Maria Monk fell from public view. A rumor emerged that she had actually been a prostitute in Montreal, and that the years she claimed to have spent in a convent were spent in the Magdalen Asylum for Wayward Girls. She was later arrested for picking the pocket of a man who had paid her for sex. She died in prison on Welfare Island, New York City, in 1849. Her Awful Disclosures, despite having been shown to be false, remained in print until well into the twentieth century.
Links and References
Hate Crimes Literary Hoaxes Outrage Hoaxes Religion 19th-Century Hoaxes (1800-1850)
Tweet