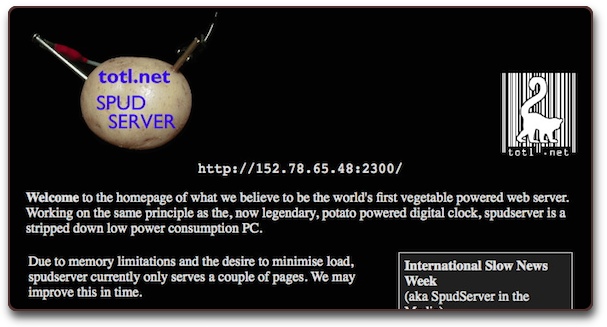 Getting a potato to power a clock is a popular high school chemistry project. The website Spud Server purported to take this concept a step further by using potatoes to power an internet server.

Visitors to the site (which loaded extremely slowly) could marvel at their interactive participation in such a technological feat.

It was an idea that the media just couldn't resist, and so it soon gained international exposure, covered by media outlets such as USA Today and BBC News. Here's what USA Today said about it:


Like a lot of interesting Internet projects, the Spud Server began with suds. As in a few pints at the local pub, reports Steve Harris, one of its builders in Southampton, England.

The Spud Server is exactly what it sounds like: a server powered by potatoes. Specifically, lots of potatoes sprouting metal prongs. The water and salt in the potatoes conduct electricity, turning the potatoes into batteries.

"It was a bet," Harris says. He and others who run the non-profit Net company Temple ov Thee Lemur were talking about potato-powered clocks at a pub, one thing led to another, and thus was born an ultra- low-power, stripped-down computer fed by spuds.

"It's not like it's an important technological leap," Harris says. "Apparently, it also works with beer, but we haven't tried that yet." 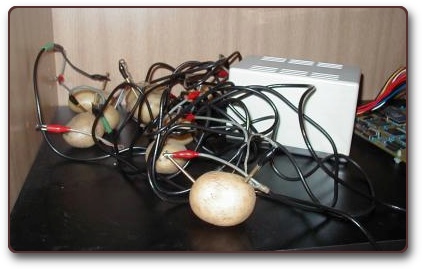 "The Noble Spud"
The site reached the peak of its popularity in May 2000, but when its creator, Steve Harris, saw that it was being reported "everywhere," he began to feel guilty and decided to confess. He told USA Today, "Once it started to get into the media, we couldn't resist claiming it was real (sorry!). Every time we did another interview, we kept thinking, 'This will be the last one.' . . . But it kind of snowballed."

Harris also noted that, while their site was a sham, the concept was technically feasible.

Inspired by this thought, Fredric White later tried to create an actual, working spud server. He brought it online in June 2000. However, he didn't use potatoes to power the entire server, only the server's cpu. As White noted, powering the entire server would have required over one thousand potatoes. White eventually abandoned his experiment in potato-powered computing after growing sick of the smell of rotting potatoes.
Links and References
Internet Websites Technology Hoaxes of the 21st Century Chemistry
Tweet

Well, actually one worked in Moscow. http://sheppard.ru/articles/fe/potato-server/index.shtml
Posted by JC  on  Wed Sep 21, 2016  at  04:34 AM
I immediately thought of The Long Earth series of five books. Written by Terry Pratchett and Stephen Baxter. Marvelous science fiction. The central device is powered by a potato.

Cheers. Thanks for the site, lots of fun.