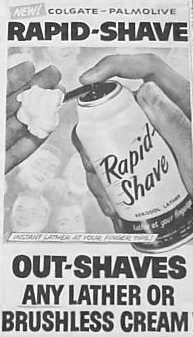 There's often a loose relationship between how products appear in TV advertisements, and how they appear in real life. This is because advertisers use a variety of tricks to make their products look their best on camera. They shine fruit and vegetables with glycerin, give champagne extra fizz with a bit of aspirin, and use lighting effects to make clothes appear sparkling white.

But sometimes what you see in ads isn't what you think you're seeing at all. What looks like milk might be white glue — because cereal won't go soggy in glue. What appears to be ice cream might really be mashed potatoes — because ice cream melts quickly under studio lights.

Advertisers argue that such tricks — the use of undisclosed props and mock-ups — are necessary because of the limitations of TV technology. They sometimes have to use deceptive methods in order to accurately represent their product. But how far can this deception go before it becomes outright misrepresentation? A case from 1960 tested the limits of this practice, and became an important legal precedent that, to this day, guides how advertisers are allowed to sell their products on TV.


It Even Shaves Sandaper!
In 1959, the Colgate-Palmolive company began airing three TV ads in America for its Palmolive Rapid Shave shaving cream. All three commercials included a "sandpaper test" designed to demonstrate that Rapid Shave's "moisturizing" action was so powerful it would not only soften up even the heaviest beard in seconds, but also make sandpaper shaveable. 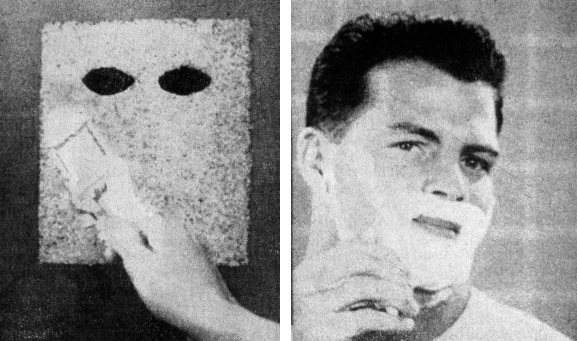 Stills from the 1959 "sandpaper" commercial
The ads began by showing what appeared to be a piece of sandpaper as a voiceover spoke:


"To prove RAPID SHAVE'S super-moisturizing power, we put it right from the can onto this tough, dry sandpaper. It was apply . . . soak . . . and off in a stroke."
A hand holding a razor then reached out and, with one stroke, shaved a strip of the sandpaper smooth.

The picture then shifted to football-player Frank Gifford lathering his face as the voiceover continued, "And super-moisturized Palmolive Rapid-Shave can do the same for you." 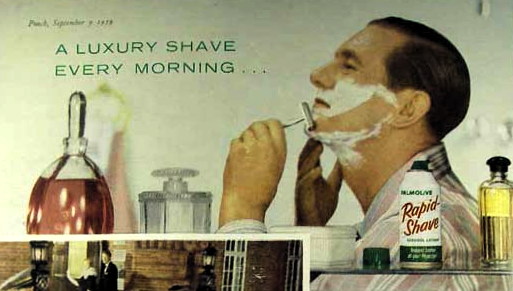 1959 print ad for Palmolive Rapid Shave
The FTC Takes Action
In January 1960, after the ads had been airing for months and had become familiar to American TV viewers, the Federal Trade Commission issued a formal complaint against Colgate-Palmolive and its advertising agency, Ted Bates & Co. The FTC charged that the sandpaper ad was deceptive because the ad suggested to viewers that they were seeing a piece of sandpaper being shaved, when what they were actually seeing was plexiglass covered with sand.

Colgate-Palmolive responded with indignation. It explained it hadn't used real sandpaper because of the limitations of photography. On film, sandpaper was indistinguishable from smooth colored paper. Therefore it had felt compelled to use "a device which made it possible to properly show the action on film in a manner consistent with actual performance."

Furthermore, Colgate-Palmolive insisted that scientific research had proven "beyond any doubt" that Rapid Shave did allow sandpaper to be shaved. The company insisted, "This demonstration has been duplicated successfully on many occasions and most recently to an FTC representative who actually made the sandpaper test himself."

But the FTC disagreed and countered, "The limitations of the medium may present a challenge to the creative ingenuity and resourcefulness of copywriters; but surely they could not constitute lawful justification for resort to falsehoods and deception of the public."

What's more, according to the FTC, its own tests had found that Rapid Shave only made sandpaper shaveable after over an hour of soaking, not almost instantly as the ad implied.


Historical Context
Lurking behind the FTC's decision to crack down on the sandpaper commercial was a recent quiz show scandal that had rocked the entertainment industry. Charles Van Doren, a contestant on the popular quiz show Twenty-One, had electrified audiences as he managed to win big prizes week after week. But in 1957, a previous contestant revealed that he had been instructed to let Van Doren win. It was then discovered that Van Doren was being given answers by the producers of the show — as a way to generate popular interest in the show and please advertisers.

The scandal led to congressional hearings, and the FTC came under pressure to rein in deceptive techniques by advertisers. As a result, the commission had appointed three monitors whose job was to watch TV all day, scanning network television shows for trickery and fakery in commercials.

This was the context in which the FTC issued the notice to Colgate-Palmolive. It simultaneously issued complaints against three other advertisements — for Blue Bonnet margarine, Alcoa Wrap aluminum foil, and Lever Brothers Pepsodent toothpaste:
The complaints issued against these four advertisements were the first large-scale action by the FTC against exaggerated ad claims on television. 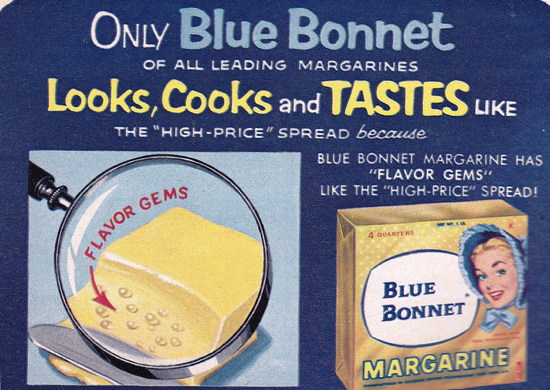 Advertisers Fight Back
The advertising industry didn't take the FTC's actions lying down. On January 20, 1960, Walter Weir, chairman of the ad agency Donahue & Coe, gave a speech at the Art Directors Club of New York in which he denounced the FTC's action and posed this question: 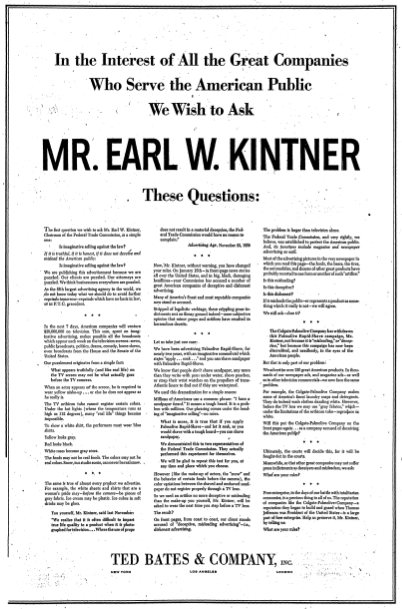 Five days later, on January 20, Ted Bates (of Ted Bates & Co. — the agency responsible for the sandpaper commercial) took out a full page ad in seven major newspapers, including the New York Times, Wall Street Journal, and Chicago Tribune — at a cost of $23,574. The ad took the form of an open letter to Earl Kintner, Chairman of the FTC:

We know that people don't shave sandpaper, any more than they write with pens under water, shave peaches, or strap their wrist watches on the propellors of trans-Atlantic liners to find out if they are waterproof.

We used this dramatization for a simple reason:

Millions of Americans use a common phrase: "I have a sandpaper beard." It means a tough beard. It is a problem with millions. Our phrasing comes under the heading of "imaginative selling" — no more.


What is more, it is true that if you apply Palmolive Rapid-Shave — and let it soak, as you would shave with a tough beard — you can shave sandpaper.

We demonstrated this to two representatives of the Federal Trade Commission. They actually performed this experiment for themselves.

We will be glad to repeat this test for you, at any time and place which you choose.
However (like the make-up of actors, the "snow" and the behavior of certain foods before the camera), the color variations between the shaved and unshaved sandpaper do not register properly through a TV lens.

So we used an artifice no more deceptive or misleading than the make-up you yourself, Mr. Kintner, will be asked to wear the next time you step before a TV lens.

On front pages, from coast to coast, our client stands accused of "deceptive, misleading advertising" — i.e. dishonest advertising.
The Realist Weighs In
In March 1960, Marvin Kitman wrote an article for The Realist (Paul Krassner's counterculture magazine) in which he discussed his decision, in the spirit of inquiry, to conduct the 'sandpaper test' himself. He noted that he appeared to be the only consumer who was curious enough to do so.

But upon arriving at a hardware store, Kitman realized a problem. The commercial hadn't specified what kind of sandpaper to use. Fine or coarse? Kitman resolved to try both.

Back at his house, he set to work shaving sandpaper. His results were somewhat equivocal:


After I lathered up the fine sandpaper, held my breath, twisted my neck a little — and shaved sandpaper for the first time, ever — nothing significant seemed to be happening on the sandpaper. So I shaved it again. And again.

By the twelfth stroke (there didn't seem to be any point to quitting earlier in the game) I was ready to study the sandpaper: the shaved sandpaper was definitely milder — I mean smoother.

As a control, however, I also shaved an adjoining section of sandpaper, this time omitting the Rapid-Shave. It, too, was definitely smoother, although not as damp.

Next I attacked the coarse sandpaper. After twelve strokes, my razor was still jumping over the sandpaper like a bicycle over trolley tracks.

The results this time were less happy. There were bits of loosened sand on the paper, but not even Ted Bates & Company could call that sandpaper "shaved." Conclusion: Rapid-Shave could do the job — if a power-grinder were substituted for a razor. (The blades I used, incidentally, are now worthless.)

Even though I was up to my ears in shaving cream by this time, I added one more control to the test: shaving with plain old-fashioned bar soap.

In both cases -- fine and coarse sandpaper — soap worked just as well as Rapid-Shave.

Lawyers Weigh In
Despite the loud howls of protest from advertisers, the FTC wasn't willing to change its mind. And so the dispute went in to the hands of lawyers and the courts.

At first, things went in Colgate-Palmolive's favor. In 1963, the First Circuit Court of Appeals ruled that the FTC's complaint against Colgate-Palmolive's use of a mock-up was too vague and restrictive. It acknowledged that a mock-up "constitutes a misrepresentation of a sort," but nevertheless held that a mock-up was not deceptive if its primary purpose was to "compensate for deficiencies in the photographic process."

However, this wasn't the final ruling. The case went to the Supreme Court which, in 1965, reversed the ruling of the lower court, finding in favor of the FTC (FTC v. COLGATE-PALMOLIVE CO., 380 U.S. 374). Chief Justice Warren, delivering the opinion of the court, wrote:


When the commercial not only makes a claim, but also invites the viewer to rely on his own perception for demonstrative proof of the claim, the respondents will be aware that the use of undisclosed props in strategic places might be a material deception.
The 1965 Supreme Court ruling remains the main precedent in American law for the use of mock-ups in advertisements. As a result, advertisers are now careful to identify product presentations as "dramatizations" when using mock-ups.

And, of course, shaving cream manufacturers have avoided claiming that their product can shave sandpaper.
Links and References
Advertising Hoaxes Hoaxes of the 1950s
Tweet

Wow! Snake Oil was then and now pretty darn popular.
Posted by hulitoons  in  Abingdon, Maryland  on  Fri Jan 27, 2012  at  12:26 PM
Funny thing but "shaving" sand paper doesn't prove anything anyway. The granules are affixed to the paper with glue, which simply dissolves in a moist environment. The action of the razor blade simply wipes away the loosened granules. Beard stubble, of course, is not just glued to one's face!
Posted by andychrist  on  Sun Jan 29, 2012  at  11:09 PM
Wow, this was a fun read! It would be great to get more in-depth articles like this on the site!

Posted by coit  on  Mon Jan 30, 2012  at  10:54 AM
Could the FTC take on Fox News? It is not news, just opinion. News ought to require facts or it is not news. Fox theater, Fox Playhouse, Fox Entertainment, Fox Wrestling-- sorry WWE is about as real as Fox, and I got them mixed up. Fox World is a fitting description, like bizarro world where truths are lies and lies are truths.
Posted by dleet86  on  Mon Jan 27, 2014  at  06:56 AM
I'm working on an assignment for one of my classes, and I was interested in where you found the images or the video from your "1959 'sandpaper' commercial." Any information would help?
Posted by Jessica Johnson  on  Mon Feb 29, 2016  at  04:25 PM