January 2, 1961: 100,000 spectators filled Pasadena's Rose Bowl stadium to watch the Minnesota Golden Gophers take on the Washington Huskies in the New Year's Day game (played that year on January 2 because the 1st fell on a Sunday). Millions more watched around the nation, crowded in front of tv sets in living rooms, restaurants, and bars.

NBC was providing live coverage of the game. At the end of the first half the Huskies led 17 to 0, and the audience settled in to watch the half-time show for which the Washington marching band had prepared an elaborate flip-card routine.

Sets of variously colored flip cards and an instruction sheet had been left on seats in the section of the stadium where the Washington students were located. When the students heard the signal from the cheerleaders, they were each supposed to hold up the appropriate flip card (as designated by the instruction sheet) over their head. In this way different gigantic images would be formed that would be visible to the rest of the stadium, as well as to those viewing at home. The Washington band planned on displaying a series of fifteen flip-card images in total.

The flip-card show got off to a well-coordinated start. Everything went smoothly, and the crowd marvelled at the colorful images forming, as if by magic, at the command of the cheerleaders. It wasn't until the 12th image that things began to go a little wrong. This image was supposed to depict a husky, Washington's mascot. But instead a creature appeared that had buck teeth and round ears. It looked almost like a beaver.

The next image was even worse. The word 'HUSKIES' was supposed to unfurl from left to right. But for some reason the word was reversed, so that it now read 'SEIKSUH'.

These strange glitches rattled the Washington cheerleaders. They wondered if they might have made some careless mistakes when designing the complex stunt. But there was nothing for them to do about it now except continue on, and so they gave the signal for the next image.

What happened next has lived on in popular memory long after the rest of the 1961 Rose Bowl has been forgotten. It was one of those classic moments when a prank comes together instantly, perfectly, and dramatically.

The word 'CALTECH' appeared, held aloft by hundreds of Washington students. The name towered above the field in bold, black letters and was broadcast to millions of viewers nationwide. 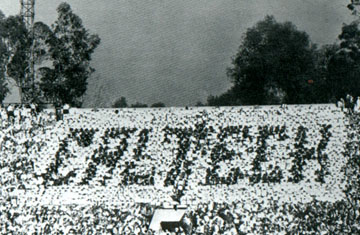 The Rose Bowl, January 2, 1961
For a few seconds the stadium was plunged into a baffled silence. Everyone knew what Caltech was. It was that little Pasadena technical college down the road from the Rose Bowl stadium. What no one could figure out was what its name was doing in the middle of Washington's flip-card show. Throughout the United States, a million minds simultaneously struggled to comprehend this enigma.

In fact, only a handful of people watching the game understood the full significance of what had just happened, and these were the Caltech students who had labored for the past month to secretly alter Washington's flip-card show.


The mechanics of the prank
Details of how the prank was pulled off were first revealed a few weeks after the game in an article written by Lance Taylor, Caltech class of 1962. The article appeared in the Caltech magazine Engineering and Science.

The idea for the prank had apparently arisen out of the indignation that a group of Caltech students (who would come to be known as the "Fiendish Fourteen") felt at Caltech's lack of representation at the Rose Bowl's famous New Year's Day game. After all, the Rose Bowl stadium was right in Caltech's backyard, and the Caltech team often played there. But every year the technical college, despite its many merits, was entirely ignored in the hype building up to the game. This group of students decided to rectify the situation. They determined to make sure that Caltech got some recognition at the upcoming game. Washington's flip-card show seemed to be the perfect vehicle for achieving their goal.

Pulling off the prank required obtaining a detailed knowledge of how Washington's flip-card system worked. This knowledge was acquired by one of them posing as a curious reporter from a local Los Angeles high school, and asking Washington's head cheerleader to explain it to them. The cheerleader happily shared all the details.

They staked out the hotel where the Washington cheerleaders were staying. When the cheerleaders were away they broke into their rooms and removed a single instruction sheet. This they took to a printer and had him print up 2,232 exact duplicates, at a cost of $30. A moment of panic occurred when it was realized that the new sheets looked conspicuously less worn than the old ones. But it was decided that since the sheets would be replaced en masse, this lack of aging might not be noticed.

Then each sheet had to be individually marked up by hand according to Caltech's new master plan, so that the seat numbers and card designations would be correct. This was done all in one marathon session on New Year's Eve at Lloyd House, the home of the Fiendish Fourteen. When the task was done, three students were dispatched back to the hotel of the Washington cheerleaders to switch the old sheets with the new, altered ones. The cheerleaders, as was known beforehand, were away from their rooms visiting Disneyland. The switch completed successfully, the Fiendish Fourteen sat back and nervously waited for their scheme to come to fruition.


The Plan Unfolds
Luck was on the fiendish fourteen's side. All the elements of the plan came together better than they had imagined possible. The first eleven images of the flip-card show had been left basically unaltered, to allay suspicion. The first real alteration occurred with the 12th image, which had been changed from a husky to a beaver, Caltech's mascot. This change was subtle enough that it escaped the attention of most of the game's audience. The 13th image had been flipped so that it read 'SEIKSUH' instead of 'HUSKIES'. The Fiendish Fourteen knew that viewers would chalk this up to simple error. But these changes were a mere build-up to the 14th image, the unveiling of 'CALTECH' itself.

At the moment when Caltech's name unfurled across the stadium, NBC's cameras were focused directly on the flip-card show, providing the best possible vantage point for viewers across the nation to watch the ensuing drama. Washington's band, upon seeing the gigantic rogue name leering down at them from the stands, immediately stopped playing, and silence descended on the stadium. Even the television announcers were momentarily speechless. For a few seconds silent tension enveloped the entire stadium. Finally the significance of what had just happened began to sink in, and then the laughter began.

Infuriated, the Washington band marched off the field, refusing to give the signal for the 15th, and final, image (which unbeknownst to them had been left unaltered). Gradually the laughter died down and the game continued. The Washington team managed to maintain its lead during the second half but didn't score any more points. The final score was 17-7.


Acclaim and Criticism
To this day the Great Rose Bowl Hoax, as it was soon dubbed, remains one of the best known college pranks ever perpetrated. Neil Steinberg, author of a classic study of college pranks, If At All Possible Involve a Cow: The Book of College Pranks, wrote that "few college pranks can be said to be more grandly conceived, carefully planned, flawlessly executed, and publicly dramatic" than the Rose Bowl Hoax.

Of course, not everyone was amused. Jack Briggs, student body president of the University of Washington in 1961, was quoted as saying, "No hard feelings, but at the time it was unbelievable. We were amazed and still feel the prank was not in the best of taste." J. Gordon Gose, Washington's faculty athletic representative, said, "Some thought it was ingenious; others were indignant. It wasn't new -- it had been done before -- but it was a surprise. It was another college prank and we have learned not to be disturbed."


Not the first... or the last
The Rose Bowl hoax was not the first college prank that involved sabotaging a halftime flip-card show. Nor would it be the last.

In 1957 a University of Southern California student infiltrated the UCLA rally committee by posing as a UCLA student. He kept up this ruse for weeks, commuting between the two campuses in order to attend each meeting. The night before the Trojan-Bruin game he managed to swap around some of the colored display squares to be used in the next day's halftime show. The result of this sabotage was that the letters "USC" appeared in red and gold in the corner of UCLA's flip-card routine. No matter how often the card-trick manager gave the signal to change the display, the letters remained in place, much to the delight of the USC fans on the opposite side of the stadium.

In 1984 a group of Caltech students attempted to repeat and surpass the 1961 hoax by hacking into the Rose Bowl stadium's electronic scoreboard system and posting rogue messages during that years New Year's Day game. While technically more sophisticated than the first Rose Bowl hoax, this second hoax lacked the shock value that the first one achieved.

Harvard-Yale game, November 20, 2004 On November 20, 2004, at the annual Harvard-Yale football game, Yale students tricked Harvard fans into holding up cards that spelled out "WE SUCK." The Harvard fans, many of whom were alumni, thought the cards would spell out "GO HARVARD." The Yale students convinced the Harvard supporters to hold up the cards by posing as the "Harvard Pep Squad." In reality, no such organization exists. The Yale students later made $3000 by selling copies of a photo of the prank. They donated this money to a Tsunami Relief Fund.

Darby-Davidson game, August 24, 2007 On August 24, 2007, students at Hilliard Davidson High School in Ohio imitated the Yale "WE SUCK" prank during a game against rival Darby High School. They left cards and directions on stadium seats, informing Darby fans the cards would spell "GO DARBY." Instead, the message read "WE SUCK." A video of the prank appeared on YouTube. The Davidson students received three days of in-school suspension as punishment for the prank.
Links and References
Hoaxes of the 1960s Student Pranks
Tweet