In February 1876, "Professor" James C. Wingard of New Orleans announced he had invented a powerful new weapon that would utterly destroy any naval vessel, iron or otherwise, "so as to leave no trace of them in their former shape." Wingard was coy about the exact means by which his weapon operated. He would only say that it projected a "nameless force," which somehow involved the use of electricity, applied without any direct connection between the machine and the object to be destroyed — and it supposedly worked at a distance of up to five miles, far beyond the range of any other gun or cannon. In other words, this was a nineteenth-century version of a death ray. Wingard claimed that a few ships outfitted with his weapon would be able to dominate all the other navies in the world combined. In fact, he anticipated that his weapon would mean the end of naval warfare altogether, since the first navy to acquire it would become invincible and reign supreme. 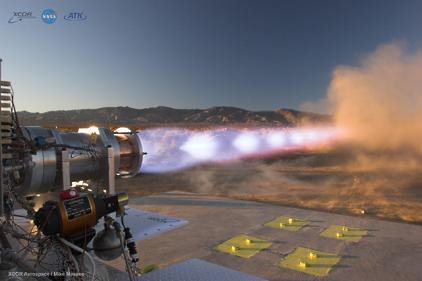 The New Orleans Demonstration
On June 8, 1876, Wingard conducted a demonstration of his "nameless force" weapon in Lake Pontchartrain, attended by a committee of prominent citizens and naval officers.

The committee watched from the shore, while Wingard operated his apparatus from a small skiff on the water. The target vessel was a large, wooden schooner (the Augusta), anchored one-and-three-fifths of a mile away.

At 2:35 p.m. Wingard gave the signal that he was about to discharge his apparatus. The people on shore saw some smoke rise from his machinery. Later, some of them claimed they saw the trail of some kind of substance move rapidly through the water, out from beneath the skiff and toward the schooner.

However, initially nothing happened to the schooner. Over a minute passed, and the spectators assumed the test had been a failure. But suddenly there was an explosion, and a cloud of smoke rose above the stern of the vessel. "There she goes!" someone said. The schooner began to sink rapidly into the water.

The committee members rowed out to the ship and found it completely wrecked. From a report in the New Orleans Republican:


"Even the small timbers aft of the mainmast were broken all to pieces. The mast was still standing, but all else was wrecked so that it would not stand being towed ashore. The flag was torn to pieces and fell to half mast, where it was still flying."
Unfortunately, Professor Wingard burned his hand during the demonstration. He explained that the silk glove with which he held a glass tube had not been a sufficient non-conductor. But apart from this mishap, the test was deemed to be a complete success. 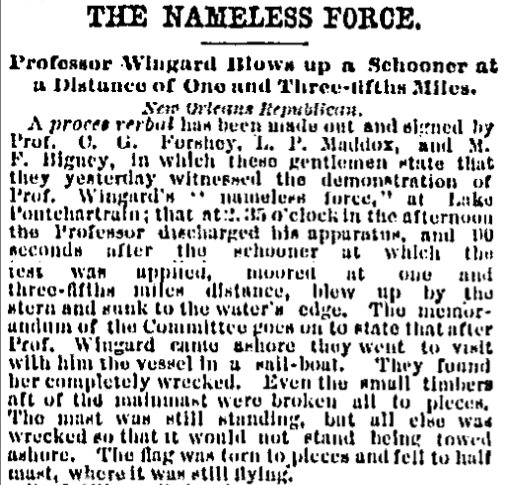 June 9, 1876 headline in the Chicago Daily Tribune
The Boston Debacle
Buoyed by the success of the New Orleans demonstration, Wingard moved to Boston several years later, where he formed a stock company to further develop his weapon. His company soon raised $1800, but his new investors wanted to see the weapon work for themselves. So Wingard arranged for a demonstration in Boston Harbor.

Wingard manned his apparatus from inside a dark house on the deck of a small steamer. A target vessel was positioned about a mile away. But suddenly, before the test had begun, there was a large explosion on the water, at a considerable distance from both vessels. The wreck of a rowboat was then found at the site of the explosion, carrying the mangled remains of two bodies. Wingard appeared highly agitated by what had happened and said his experiment couldn't be carried out that day.

But, shaken by the tragedy, Wingard broke down a few days later and confessed the truth to his stockholders. His "nameless force" weapon was a sham. The demonstration was a trick achieved by placing dynamite under the target vessel, connected to the triggering apparatus by an underwater wire. Two of Wingard's co-conspirators had been on their way to place the dynamite when an accidental explosion occurred, killing them both.

If I say 'hoax' I'd be suggesting the sham was a hoax so I'd be suggesting the 'death ray' was the culprit. I just find it difficult to visualize the plots and steps some people go to create these kinds of scams!
Posted by hulitoons  in  Abingdon, Maryland  on  Thu Nov 17, 2011  at  04:49 AM