On Thursday April 3, 1817, a strange woman appeared in Almondsbury, a small town near Bristol in Gloucestershire, England. She was five foot two, extremely attractive, and wore a black shawl twisted turban-style around her head. She spoke no known language and so had to communicate with the people of the town through gestures. Because she appeared to have been wandering the countryside alone, either lost or destitute, she was sent to see the Overseer of the Poor, who, in turn, sent her to Knole Park, home of Samuel Worrall, the Magistrate of the County. 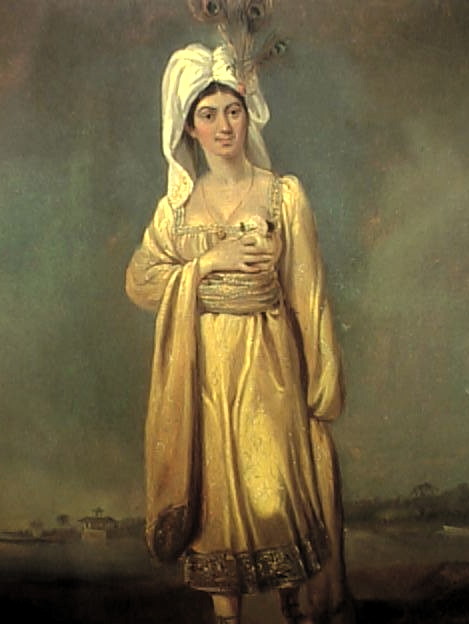 Princess Caraboo, by Edward Bird
It was a dangerous time in England to be a homeless foreigner wandering the countryside. The British had recently defeated Napoleon and sent him into exile on the island of St. Helena, but the British authorities were still worried that foreign agents might be present in the country gathering information or trying to foment revolt. Anyone found guilty of disturbing the peace was in danger of being shipped to Australia or even executed.

Princess Caraboo, by Thomas Barker
When the Worralls met the woman, however, they found her less disturbing than intriguing. Mrs. Worrall, in particular, was fascinated by her. The woman's language was like nothing she had ever heard. The woman's hands were soft, not those of a laborer, and when the woman noticed a picture of a pineapple hanging on a wall, she pointed at it excitedly, as if recognizing it from her homeland. She exhibited other strange behavior, such as refusing to drink out of a glass until she had washed it herself. What puzzled Mrs. Worrall, however, was that although by her language and behavior the woman seemed to be from some exotic, faraway corner of the world, the woman's features were definitely European. Mrs. Worrall wondered if the woman was Spanish, Greek, or even a Gypsy.

Despite Mr. Worrall's misgivings, the woman soon came to live at Knole Park while Mrs. Worrall tried to solve the mystery of her origin. Clues began to emerge. First the Worralls learned that the woman's name was Caraboo. Or, at least, the woman would frequently say the word 'Caraboo' while pointing at herself. Then a Portuguese sailor appeared who claimed to be able to speak her language. Translating for the woman, the sailor explained that she was a princess in her own land, the island of Javasu. She had been abducted from her island home by sailors and, after a long and arduous journey, had escaped from her captors by jumping overboard in the English Channel and swimming to shore.

View of Knole Park in Gloucestershire, where Princess Caraboo lived for many weeks.
When the Worralls learned that Caraboo was actually foreign royalty, they immediately announced her presence at their house to the newspapers, and soon all of England knew about Princess Caraboo. For a few weeks the Princess lived in a grand style, spending her days dancing, fencing, climbing trees, praying to her god 'Alla Tallah,' entertaining the numerous visitors who came to see her, and swimming naked in the lake when she was alone (this last behavior gained her enormous notoriety). The Worralls, meanwhile, basked in the reflected glory.

Characters drawn by Princess Caraboo. Also shown is the autograph of Mary Baker.
However, the party came to an abrupt end when a woman called Mrs. Neale recognized a description of Caraboo printed in the Bath Chronicle. She revealed that Caraboo had recently been employed as a servant at her house, where she had entertained the children by speaking a strange, nonsense language of her own creation, and that her true name was Mary Baker, daughter of a cobbler in Witheridge, Devonshire. Caraboo reluctantly admitted that she was a fraud.

It's not entirely clear why Mary Baker chose to assume the identity of Princess Caraboo. Those who knew her as Mary Baker later explained that she had always demonstrated rather theatrical behavior, seeming to prefer to live in her own world of make-believe fantasy rather than in the real world. Apparently she had noticed that by posing as an exotic foreigner she could more easily elicit sympathy and help while travelling on the road (see the Native of Formosa, 1703), and so began her imposture.

However she came to create the character of Princess Caraboo, her deception was powerfully aided by the desire of people to believe that the character was real. As Princess Caraboo, she appealed to the aesthetic of Romanticism that was emerging in Europe (expressed through the work of artists such as Byron, Keats, and Shelley). The British felt that she looked and acted how, according to their romanticized image of the Orient, an exotic foreign princess should look and act. She was mysterious and beautiful, and they desperately wanted to believe that the fantasy she presented them with was real.

Frontispiece to Caraboo: A Narrative of a Singular Imposition, showing her in the costume she was wearing when she first appeared in Almondsbury.
Once her imposture was revealed, she also came to symbolize a cultural shift that was far more powerful: the crumbling of the power of the English aristocracy. Napoleon was the most powerful symbol of the challenge faced by European aristocracies, but like Napoleon, Princess Caraboo was a representative of the lower classes who, through her talents alone, had successfully challenged the upper classes and won, at least temporarily. The British press gleefully repeated how she had pulled the wool over the eyes of the upper classes by appealing to their own vanity and greed.

Mary Baker's natural charm, which aided her so much in her portrayal of Princess Caraboo, continued to sustain her after her unmasking. Mrs. Worrall took sympathy on her and not only forgave her for the deception, but offered her enough money to allow her to sail to Philadelphia. A few weeks after her departure, a British reporter wrote a story claiming that while sailing to America, Princess Caraboo's boat was blown off course and drifted near St. Helena, where Napoleon was exiled. Supposedly Princess Caraboo rowed out to meet Napoleon, who was immediately captivated by her charms. The former Emperor begged her to marry him, but she refused. The story was intended to be a joke, but the pairing of Napoleon and Caraboo proved so appealing that many of the accounts of Caraboo which have appeared since 1817 have reported the story as fact.

Princess Caraboo's fame preceded her to America, and upon her landing she was besieged by curiosity seekers. After seven years she tired of America and returned to England where she occasionally responded to the continuing interest in Caraboo by giving public performances dressed as the Princess, but as the popular memory of her story faded, she made a living instead by selling leeches to the Infirmary Hospital in Bristol. As odd as this profession sounds to people today, it was considered entirely respectable in the 19th century and earned her an above average income. She died on January 4, 1865 and was buried in an unmarked grave in the Hebron Road cemetery in Bristol.
Links and References
19th-Century Hoaxes (1800-1850) Imposters
Tweet

Dear Mr. Boese,
I came across your web-site tonight while checking for other sites including "Caraboo." For your reference, I have produced a hypertext edition of Gutch's
"Caraboo" at my web-site, at: http://www.resologist.net/carabooa.htm

I shall have to spend some more time going over many of the hoaxes covered by your site. I would recommend one item, which may be a hoax and which is associated with many hoaxes in its solution, for inclusion in your list: the "Grave Creek Stone." There is a fairly good review with illustrations, at: http://www.econ.ohio-state.edu/jhm/arch/grvcrk.html

There are a number of other hoaxes mentioned by Charles Hoy Fort, in "Lo!" Some of my favourites are Sir Flinders Petrie's discrediting of Dr. Hubert Grimme's deciphering of the story of Moses, from an inscribed stone found at a temple in Sinai, and the archaeological discoveries at Glozel, France. These are to be found in part 1, chapter 15, at: http://www.resologist.net/lo115.htm

I'm sure it is pure coincidence, especially since the Princess Caraboo hoax was confessed to, but the word for her God, "Alla Tallah", is in fact an Arabic phrase used by Muslims quite often. It means "God Most High". Kinda makes ya wonder... 😊
Posted by Najiyah  on  Thu Feb 20, 2003  at  07:07 PM
Dear Alex,
I found your site today while searching for information about Princess Caraboo. The reason for this, is that Princess Caraboo's grave is in danger of being buried under tarmac. You state that her grave is unknown. This is not the case. It is situated in a tiny cemetery on Hebron Road, in Bedminster, Bristol. The Victorian chapel that it belongs to is now a buisness center, and planning permission is being sought to turn this little graveyard into a carpark.
Posted by Esma  on  Thu Jun 26, 2003  at  05:08 AM
The Princess Caraboo story is a wonderful tale. I came across it 15 yers ago, some years after I moved to the village of Almondsbury near Bristol where the whole thing 'happened'. I am a writer and wrote a screenplay for the BBC on the subject, followed by a stage play in 1990 and some years ago a Radio play for BBC Radio 4 which is still on the BBC Web site. I am currently discussing writing a community play for the Devon village of Witheridge, Mary Baker' (Caraboo) birthplace. Incidentally, the late John Wells, who wrote the Caraboo movie and the book quoted in your newsgroup, and I met up while he was filming his story, and talked about Caraboo like she was a shared old friend. The more people who know the story the better.
Posted by Roger Stennett  on  Mon Jul 28, 2003  at  11:04 PM
Was she abducted? If so, how and when?
Posted by Loren Barboza  on  Thu Nov 07, 2013  at  04:55 PM