In 1941 a small college football team racked up an incredible season of victories. But who was this team and where was the college? No one had ever heard of them before.

Morris Newburger, a partner at the Wall Street firm of Newburger, Loeb & Company, was a big sports fan. But he always had to scratch his head in curiosity when he read the football scores listed in the Sunday papers for small colleges such as Slippery Rock State Teachers College. Did such colleges really exist, he wondered, or was a sports editor just inventing them and their games to fill up space?

This thought gave him an idea. What would happen if he phoned in a score for a college that was definitely fictional? Would it get printed? He decided to find out. So on a Saturday in the Fall of 1941, he picked up his phone and called the sports desks of various New York City papers to report that the (nonexistent) Plainfield Teachers College of New Jersey had just beaten Winona (also nonexistent) 27-3.

To his great amusement, the score for Plainfield T. vs. Winona faithfully appeared the next day in the major papers.

The easy success of his hoax made him decide that Plainfield Teachers College needed to complete its football season. So for the next few weeks, he kept calling the sports desks of the papers every Saturday, and sure enough, the scores for "Plainfield T." would appear in the papers the next day. Plainfield was always victorious, crushing its opponents in lopsided wins. 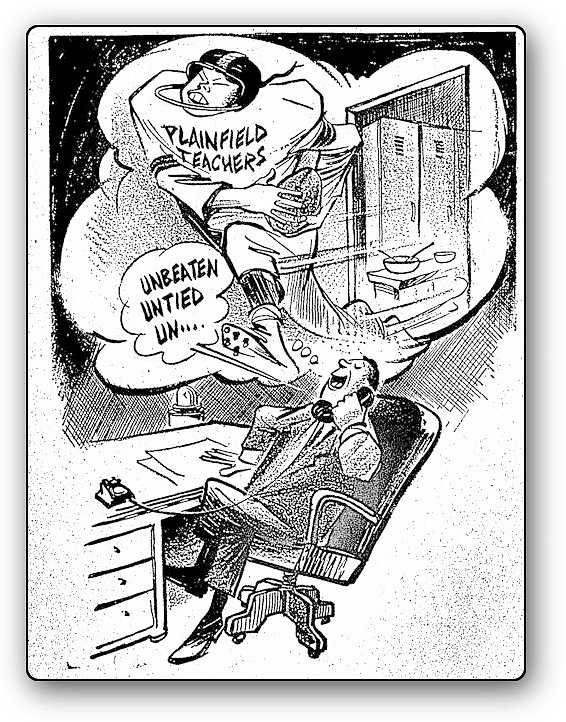 Newburger quickly widened the scope of his fantasy. He began adding details to his reports about the players and staff of the team. For instance, he claimed that Plainfield's star player was halfback John Chung, a 212-pound half-Chinese, half-Hawaiian player who boosted his strength by consuming huge portions of wild rice at halftime. These details also made their way into sports columns.

Newburger's deception didn't last very long. It was exposed within a month. But its gentle humor appealed to the imaginations of both sports writers and the public, and the Plainfield Teachers subsequently became the most popular nonexistent football team in America. The fake team continues to be remembered to this day as a classic sports hoax. 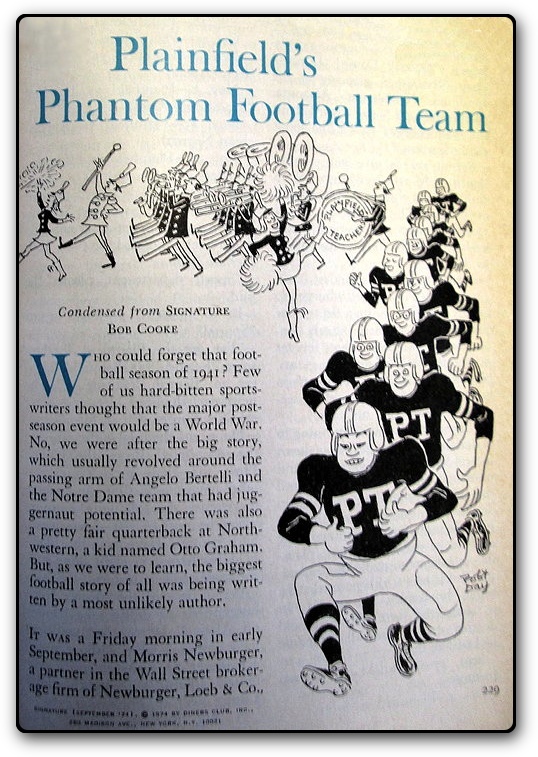 Pulling Off The Hoax
Over the years, as the story of the Plainfield Teachers hoax has been told and retold, the details of it have often been significantly "improved." What follows is hopefully a reasonably accurate account of the hoax (verified, wherever possible, by checking primary sources).

It began on the evening of October 25, 1941 (not in September, as is often reported) when Newburger called the sports desk of the New York Herald Tribune, and told the reporter who answered the phone, Harold Rosenthal, that he wanted to report a small-college football score: Plainfield Teachers, 27; Winona, 3.

"Yes," Newburger responded. And that was that.

Rosenthal later explained why the call didn't arouse his suspicion. "It was not uncommon," he said, "for the smallest schools to telephone their scores because of the lack of telegraph facilities. Also there were a good many small schools taking up football and dropping it continually. Teachers colleges were in the van in this respect."

Of course, part of the joke was that teachers colleges were often predominantly female, which made it unusual for one to have such a powerhouse football team.

Apparently Newburger chose to situate his fictional college in Plainfield because that's where his secretary was from.

After phoning the Herald-Tribune, Newburger then called the New York Times, United Press, and Associated Press. From each organization, he received a positive response. A friend in Philadelphia, Alex Dannenbaum, phoned in the scores to the Philadelphia Record.

Some fifty years later, in an issue of the Princeton University Alumni Newsletter, Dannenbaum recounted his participation in the hoax. By his own admission, he didn't help Newburger come up with the idea (as is sometimes suggested). He merely reported the scores in Philadelphia, after Newburger told him about his plan. Initially Newburger and Dannenbaum failed to coordinate about what team Plainfield had played. As a result, it played a different opponent in Philadelphia than it did in New York. But in subsequent weeks, their score reports matched. 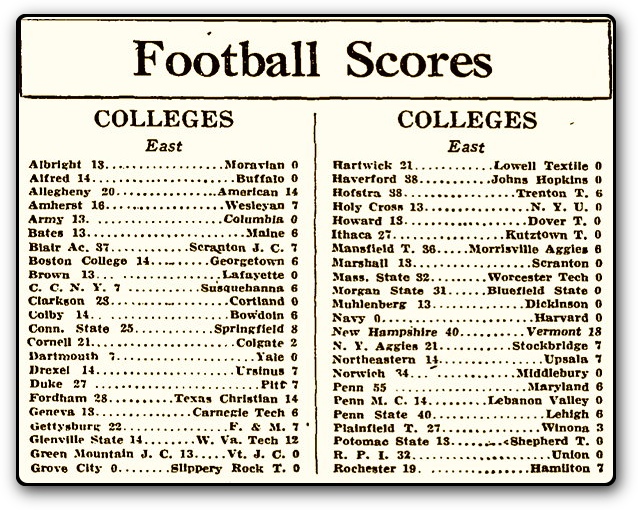 The Hoax Expands
Buoyed by the initial success of his hoax (The New Yorker reported that "a kind of godlike feeling came over him"), Newburger's ambitions for the Plainfield Teachers quickly grew. By the next week, according to contemporary reports, he had installed a special phone line in his office to communicate with the papers about the team.

He also sent out a news release on Plainfield Teachers College stationery, headlining it "From the desk of Jerry Croyden" — Croyden supposedly being the school's publicity man. Newburger had come up with the name as he walked by the Croydon Hotel in Manhattan.

In this release, Newburger detailed the games Plainfield had played earlier in the season, revealing that the team was, so far, unbeaten and untied. (It's these details about the earlier games that have confused many people into thinking that the hoax started in September.)

Newburger also fleshed out the team, providing its team colors (mauve and puce), as well as biographical information. For instance, he wrote that the coach was Ralph "Hurry Up" Hoblitzel, the former star player of Erstwhile Spearfish Normal. Hoblitzel's unique offensive strategy was the "W" formation, in which when the Plainfield players lined up with the ball in their possession, the two ends would face their own backfield so that they could "see immediately who has the ball."

Newburger drew upon his fellow stockbrokers to come up with names for the players. So the receiver was named "Boarding House Smithers," and the right tackle was a familiar "Morris Newburger."

Newburger's most elaborate character was the star halfback John Chung, aka "The Celestial Comet." Chung, who averaged an astounding (and record-breaking) 9.3 yards per carry, was a "full-blooded" half-Chinese, half-Hawaiian player who seemed destined for a future as an All-American. He downed plates of wild rice at halftime to boost his strength.

When Newburger's faux news release arrived at the New York Post, it got passed along to reporter Herbert Allan, who included a few glowing lines about Chung in his Saturday College Grapevine column (Nov. 8, 1941):


"John Chung, Plainfield Teachers' Chinese sophomore halfback, has accounted for 57 of the 98 points scored by his unbeaten and untied team in four starts... If the Jersey dons don't watch out he may pop up in Chiang Kai-shek's offensive department one of these days." 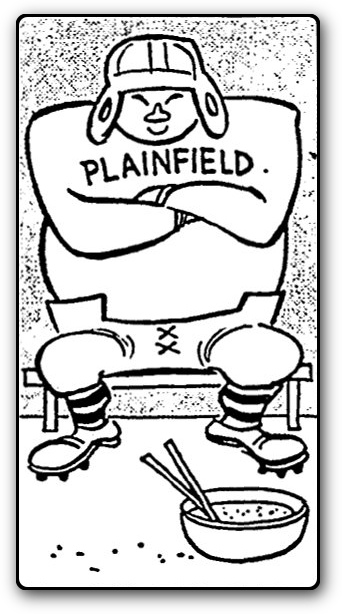 The Hoax Revealed
Newburger managed to get Plainfield's scores into papers for three consecutive weeks. So, after defeating Winona on Oct. 25, it continued its undefeated season by crushing Randolph Tech on Nov. 1 in an away game, 35-0, and followed this up with a win against Ingersoll on Nov. 8, 13-0.

But by this time, too many people had heard about what was going on. Newburger himself was talking freely about it with his friends. Someone, identity unknown, having decided the joke had gone far enough, telephoned the Herald Tribune and gave them this message, "I'll give you fellows a tip. There ain't no such college as Plainfield Teachers. Bunch of fellows down on Wall Street are kidding you."

Irving Marsh, assistant sports editor at the Herald Tribune, investigated by phoning the Plainfield Chamber of Commerce and learned that there was no Plainfield Teachers College. (No reporter ever made a special trip to Plainfield to see the team or interview Chung, as is sometimes claimed.)

The hoax was quickly traced back to Newburger who, when confronted, immediately confessed, although he begged to be allowed to finish the season, explaining that Plainfield was set to face Appalachian Tech that week followed by Harmony Teachers for their Homecoming game on Thanksgiving Day. Newburger revealed that he had even seen the Harmony game in his sleep. And following its undefeated season, Plainfield might have headed to the "Blackboard Bowl," the fictitious championship game for teams from small colleges.

But having failed to convince the Herald Tribune to allow him to finish the season, Newburger (as Croyden) sent out one final news release, explaining that, "Due to flunkings in the midterm examinations, Plainfield Teachers College has been forced to call off its last two scheduled games with Appalachian Tech tomorrow and with Harmony Teachers College on Thanksgiving Day. Among those thrown for a loss was John Chung, who has accounted for sixty-nine of Plainfield's one hundred seventeen points."

The hoax was publicly exposed by Herald-Tribune reporter Caswell Adams on November 14. He opened his article with a short poem set to the tune of Cornell's "Far Above Cayuga's Waters":


News of the hoax reached a national audience a few days later when Time magazine included a short piece about it in its November 17 issue:


Sports Page Error
The sports page of the New York Times for three weeks running has dutifully recorded the football victories of Plainfield (N.J.) Teachers College — 27-to-3 over Winona (N.J.), 35-to-0 over Randolph Tech, 13-to-0 over Ingersoll (Pa.). the Philadelphia Record and other papers also took occasional notice of unbeaten Plainfield Teachers. Only error in all the reports (cooked up by a jocose Wall Street broker) was that Plainfield and its opponents were nonexistent.
A number of papers, at this time, began referring to Plainfield's team as the "Flying Figments." It's not known which writer originated the term.


Aftermath
The story of the short-lived Plainfield Teachers is frequently cited as a classic sports hoax. In addition to being recounted in numerous newspaper articles, the hoax provided the basis for a teleplay titled Plainfield Teachers College, written by James Beach and starring Jerry Lester, that aired Nov. 26, 1956 on the Robert Montgomery Theater series. TV listings provided the following description of the play:


"A group of gentlemen who frequent a New York City poolroom evolve a plan to fool both the newspapers and the local bookmaker. They create a mythical college and endow it with an equally mythical, but very successful, football team. Each week they phone in Plainfield's winning scores to the newspapers, which gullibly print them. And each week they also bet on their team and collect a handsome sum from the bookie."
Newburger went on to serve as an Army Air Force officer in World War II. He died in 1968 at the age of 62.


Plainfield's Complete 1941 Season
Several other games are occasionally mentioned in articles about the hoax, although it's not evident when they would have been played. Perhaps these were the Philadelphia games reported by Dannenbaum?

You should start a cafepress or similar site with hoaxes.org inside joke t-shits and such. Like a "Plainfield Teachers College Football" shirt or an "I survived the Mt. Edgecumbe disaster and all I got was this lousy t-shirt" shirt
Posted by Adam  on  Tue Oct 14, 2014  at  08:42 PM
@Adam - That's a pretty good idea! I used to have a cafepress shop where I sold "Save the Jackalope" t-shirts, but it fell into disuse a couple of years ago. The limiting factor was my lack of design skills.
Posted by The Curator  in  San Diego  on  Wed Oct 15, 2014  at  07:55 AM