The Strange Case of Piotr Zak 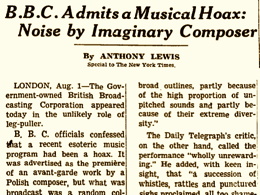 On June 5, 1961, BBC radio broadcast a 12-minute documentary on its Third Programme network about an "exciting new, imaginative, young Polish composer" called Piotr Zak. The documentary included the airing of one of his works titled "Mobile for Tape and Percussion." Two months later, the BBC confessed that Piotr Zak didn't exist. A BBC spokesman explained, "We dragged together all the instruments we could and went around the studio banging them… It was an experiment to demonstrate that some contemporary compositions are so obscure as to be indistinguishable from tapes of percussion played at random." [More info: wikipedia]
Music
Tweet