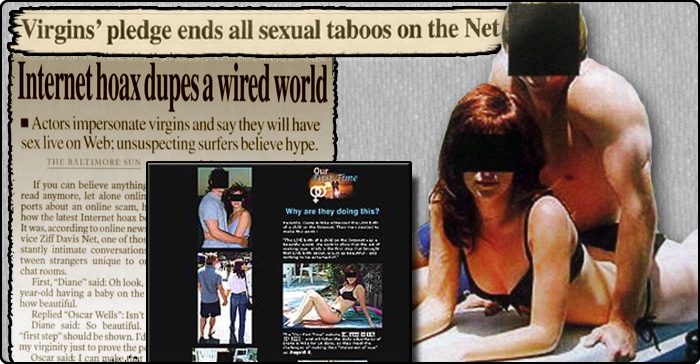 When the website OurFirstTime.com debuted in early 1998, it promised to offer an internet first. Web surfers would be able to share in the experience as two wholesome 18-year-olds, Mike and Diane, lost their virginity together at 9 pm on August 4, 1998. The event would be broadcast live, as it happened.

The mainstream media devoted large amounts of coverage to the site, offering it up as evidence of what a circus (or freakshow) the internet was. The San Francisco Examiner gave it front-page billing. However, ourfirsttime.com ran into trouble before the day of the 'internet deflowering' even arrived. So many people visited the site to read more about the story, that the site crashed and went offline.

Meanwhile, internet sleuths were suspicious. Many pointed out that Mike and Diane looked like professional models. These suspicions were confirmed when, in late July 1998, Internet Entertainment Group, the main sponsor of the site, pulled out of the deal, declaring it had been tricked into supporting a hoax. It fingered Ken Tipton, the creator of OurFirstTime.com (and a former video-store owner and small-time entrepreneur), as the mastermind of the hoax.

Tipton's plan, IEG claimed, had been to first hype the event as an educational experience, and then, once sufficient interest had been generated, to impose a $5 viewing fee shortly before the show was broadcast. Supposedly Tipton also planned to have Mike and Diane choose to abstain at the last minute. Learning of the planned abstinence was apparently the last straw for IEG.

The notoriety that the hoax achieved earned it the status of being the first widely recognized hoax website.
Links and References
Internet Websites Hoaxes of the 1990s
Tweet

The information about the Our First Time publicity stunt on this site is not accurate.

I'm the Executive Producer on "Virgin Territory: The Our First Time Story". I didn't sign on until I had throughly researched the court documents, interviewed the people involved, and verified the true story.

For instance, no one knew that Robert Wise, the Academy Award-winning Director for movies such as The Sound of Music, West Side Story, The Haunting, Star Trek - The Movie, and many others, was actually the person who suggested the publicity stunt that became Our First Time.

More important, few know that the actress that played the Internet Virgin died after being blacklisted in Hollywood over this failed stunt.

The complete story is at the two links below.

All my best,
Darlene Lieblich