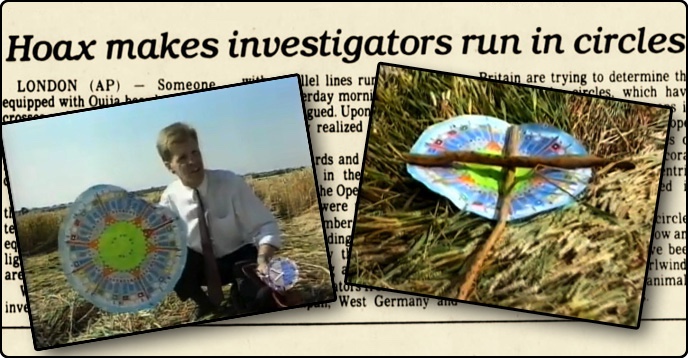 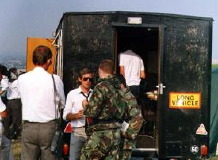 Colin Andrews confers with military personnel during Operation Blackbird
By the summer of 1990 the phenomenon of crop circles was attracting large amounts of media attention. A group of researchers, who described themselves as 'cerealogists,' set out to solve the mystery of the circles' formation once and for all. They camped out on a hillside in Wiltshire with an array of heat, light and sound detectors, in the hope of recording the creation of a crop circle, presumably by a UFO or some other mysterious (non-human) force.

Operation Blackbird, as it was called, was led by ceralogist Colin Andrew. Its funding came principally from the BBC and Japan's Nippon TV. The British Army also provided assistance. 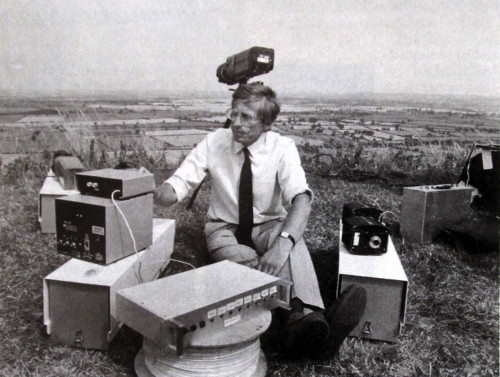 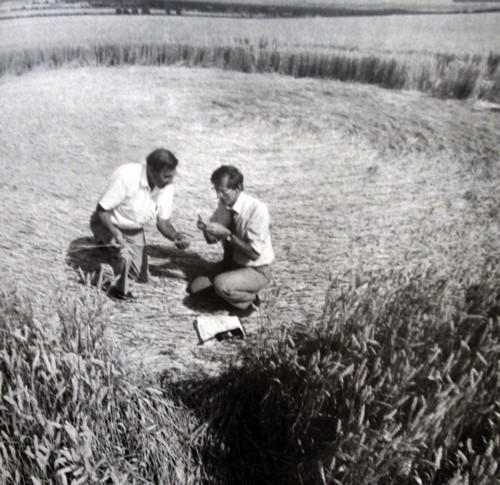 Pat Delgado (left) with Colin Andrews
On the second night, July 25, the Operation appeared to meet with success. The monitoring equipment recorded flashing orange lights in the adjacent field. The next morning Andrews excitedly told the waiting media that two large circles with parallel lines running in between them had formed during the night. 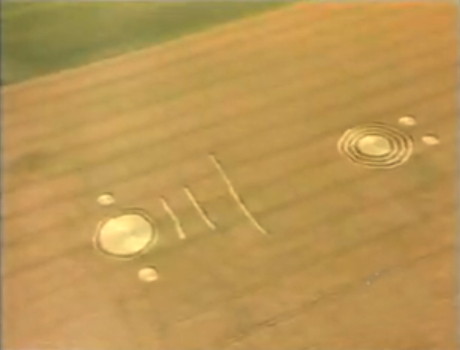 The crop circles
Unfortunately for Andrews, he spoke too soon. When the researchers examined the circles more closely, they found the calling card of a hoaxer awaiting them. Someone had suggestively left a horoscope-chart board game and a wooden crucifix in the middle of the swirled stalks. Andrews admitted that the flashing orange lights had probably been the heat signature of the hoaxers running around in the field. He told the press, "Somebody had a joke, but it has actually set our research back. We have a serious job to do. It is only funny for 60 seconds."

The identity of the hoaxer has never been determined, but the event seriously undermined the efforts of the cerealogists to be taken seriously. Conspiracy theorists suggested that the army itself had perpetrated the hoax in an effort to undermine the credibility of the researchers. 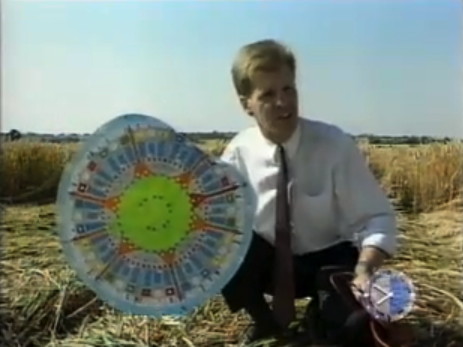 I have enjoyed the Crop Circle phenomenon since it's delightfully rural simplicity began but today, with that fetid smell of scam money around it, it has all the markings of another Roswell.
It's still fun to see the creativity of the wheat stompers but let's start calling it what it is,"Crap Circus".
Posted by Sir Trev  on  Sun Dec 04, 2005  at  07:10 PM