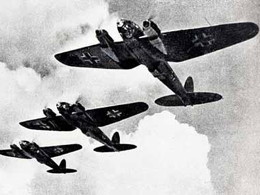 Italy's Popolo D'Italia newspaper reported that the Loch Ness Monster had been killed by a direct bomb hit in a German air raid. However, the Italian reporting was proven to be a hoax when Nessie sightings continued unabated. Specifically, when J. MacFarlan-Barrow and his three children saw Nessie while boating on the Loch in August 1941, the Daily Mail made a point of noting that Nessie had survived the Nazi attempt on her life.
Loch Ness Monster Hoaxes
Tweet