The Lost Island of Hi-Brazil

In 1480 a fully-laden ship left the port of Bristol, England to sail west in search of the island of Hi-Brazil, which was believed to be somewhere off the coast of Ireland. It met with no success. Nor did the two ships which sailed the following year in search of the island fare any better. And the five ships captained by John Cabot which set sail in 1498 to search for Hi-Brazil came up equally empty-handed.

There was one very good reason why none of these ships could find Hi-Brazil: the island didn't exist, outside of legend.

Stories about the island had circulated around Europe for centuries, telling that it was the Promised Land of the Saints, an earthly paradise where fairies and magicians lived. But supposedly the island was surrounded by thick fog, hidden from the eyes of mortals. 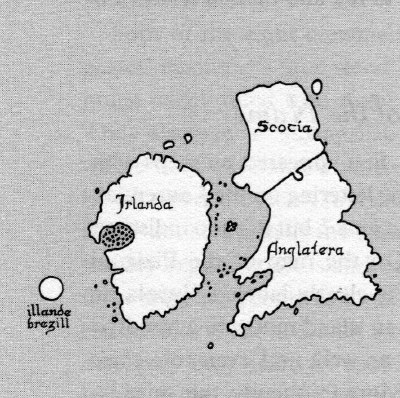 Detail from the Catalan map of 1350 showing the location of Hi-Brazil.
(Image from Donald Johnson's Phantom Islands of the Atlantic)
Apparently quite a few people thought there might be something to these legends. Cartographers, in particular, were confident enough in the existence of the island to start putting it on maps in the mid 1300s. And its existence as a point on maps appears to have inspired all those ill-fated voyages during the late 1400s to find it.


Nisbet's Discovery of Hi-Brazil
We might forgive those European explorers who put their faith in a legend and went off searching for a phantom island. After all, often times there is some hidden truth behind legends. But we must raise a skeptical eyebrow when we encounter the tale of Captain John Nisbet, who set sail from France in September 1674 intending to return home to Ireland, but who claimed that enroute he accidentally found the fabled island of Hi-Brazil.

According to Nisbet's later description, his crew chanced upon the island after sailing through an especially thick cloud of fog. They disembarked on the island and discovered that it was inhabited by large black rabbits and a magician who lived alone in a castle. The magician informed them that the spell that had kept the island hidden from the eyes of mortals had been broken.

This was great news, and other people, upon hearing it, wasted no time in attempting to profit from it. In 1675 a man named Mathew Calhoon used Nisbet's account to file a request with King Charles I for a patent of ownership to the island of Hi-Brazil. It's not clear what the basis of his claim to the island was since, by his own admission, it was Nisbet who had found the island, not himself. Apparently he felt that the island should rightfully be his since he had read Nisbet's account. Unfortunately King Charles's reply to Calhoon is not recorded, but whether or not Calhoon ever received his patent is quite irrelevant, since the island was never found again. Evidently the spell had not been broken.
Links and References
Exploration and Travel Geography Fictitious Places Hoaxes of the Middle Ages
Tweet

That's why they called the country of Brasil, Brazil. Cartograohers thought that Hy-Braesal/Hi Brazil must be the South American east coast and was thefore the same place. It was also belevied that the Fountain of Youth was on Hy Brasel as well.

Posted by Paul Schmidt  on  Tue Jan 31, 2012  at  06:50 AM
Hy Brasil is not a hoax, but due to the rising sealevels it is now under the waters of the Atlantic Ocean
Posted by Rowie  on  Wed Sep 05, 2012  at  04:59 AM
A good example of sea level changes in this area of the world can be found in relation to the Isles of Scilly. http://en.wikipedia.org/wiki/Isles_of_Scilly

These islands were as recently as the roman period described as a single island and several sets of field walls have been discovered in the surronding shallows.
https://maps.google.com.au/maps?client=firefox-a&q=isles+of+scilly&ie=UTF-8&hq=&hnear=0x484008d08dabddfd:0x2057dab480b7fbe6,Isles+of+Scilly,+UK≷=au&ei=EP6nUsCNBo3YoATKpIGICQ&sqi=2&ved=0CJYBELYD

Recent work with inhundating mapping points to the last great sea rise in world to have ocurred between 300 and 600 AD depending on local conditions. This then brings alive the prospect that some of these island myths might actually have a grain of truth in them remembered from the days of oral tradition.
http://www.geosociety.org/gsatoday/archive/19/9/article/i1052-5173-19-9-52.htm
Posted by Aaron  on  Tue Dec 10, 2013  at  10:12 PM
The story I hear since the craddle is that Brasil was named after the tree pau-brasil , which in Portugal portuguese is the name for a tree whose main characteristic is its red wood , very resistant . Brasil is also a noun for place with " burning ashes", like what becomes visible after any wood fire is extiguishing, and red in color , hence the name of the tree . But yes, I am very surprised about a mitical island in the north atlantic that goes by the same name, even before Brazil land was discovered. I am really puzzled ...
Posted by George  on  Fri Apr 03, 2015  at  09:53 PM
first Brazil is called Brazil after the red trees braze meaning fire and anyway it was called the isle of the cross before it was called brazil ya donkeys and hy-brazzil did exist its just sunk now under the ocean .
Posted by Pablo Brazil  on  Tue Apr 14, 2015  at  05:22 AM
It is clear from recent academic evidence that there was an island far from the west coast of Ireland. There are many islands scattered along the west coast of Ireland, inhabited for thousands of years. One particular island bears vocal record of an older island to the west. It cannot be considered as evidence however, as science did not exist when science did not exist.
Posted by Cathsi cru gebh  on  Tue Nov 03, 2015  at  12:22 PM
Its so clear that it doesn't want to be found. Just leave it be. What are you going to do anyway when you get there?
Posted by NOONE  on  Wed May 18, 2016  at  10:10 PM
I've seen it... In my dreams, there are dimensions to this planet we really don't grasp, is it imagination or is it consciousness or spirit, maybe after death there is more a being will experience..
Posted by Traveler  on  Mon Aug 06, 2018  at  05:02 AM