James Curley, former Mayor of Boston.
In the Fall of 1924 the Prince of Wales visited Massachusetts. Foregoing official visits, he spent his time hunting at the home of a friend, Bayard Tuckerman Jr. Maintaining a low profile was understandable, given the tensions at that time between England and Ireland. Massachusetts was the home of many Irish immigrants and was, as the New York Times put it, "given to a greater love for Erin than Britain." Government officials in Massachusetts seemed inclined to ignore the presence of the Prince.

However, while the Prince was hunting, his equerry, the Hon. Captain Lascelles, was approached by a man who identified himself as Lafayette Mulligan, "the social secretary to the Mayor of Boston, James M. Curley." Mulligan presented Lascelles with a golden key to the City of Boston, which he said was a gift from the Mayor to the Prince. Mulligan also delivered the Prince a formal invitation to visit Boston and be the guest of Mayor Curley.

The Prince of Wales later sent Mayor Curley a letter, warmly thanking him for the gift of the key, which he happily accepted, but regretfully declining the invitation to visit the city as the Mayor's guest, citing his inability to change his plans on such short notice.

The letter from the Prince shocked Mayor Curley — not because the Prince turned down the invitation, but because, to his knowledge, he had sent the Prince neither a key nor an invitation. Curley issued an angry public denial, stating he had no idea who Lafayette Mulligan was, but insisting the man was NOT his social secretary. (His real social secretary was Standish Willcox.)

The joke was that Curley was the son of Irish immigrants, and his core constituency was Boston's Irish working class. He was the last person who would have attempted to curry favor with the Prince of Wales. It was for this reason that the joke annoyed Curley so intensely. 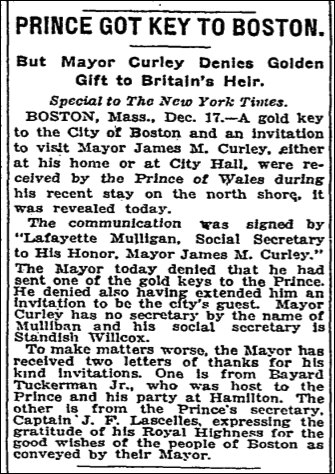 The New York Times, Dec. 18 1924
Popular Reaction
The New York Times described the Lafayette Mulligan stunt as "one of the most calmly and insolently audacious hoaxes that ever roused a staid city [Boston] to joyousness."

Diners at formal dinners attended by the Mayor were heard to shout for Lafayette Mulligan.

An actual key to the City of Boston
image via State Library of Massachusetts blog
Mulligan, for his part, continued his escapades. After the Mayor denied giving the Prince a key, Mulligan sent a key to Mr. Tuckerman, citing Tuckerman's "gracious silence following the Mayor's repudiation of his original generous impulse." Mulligan signed the letter, "former Social Secretary to his Honor, Mayor James M. Curley."

This prompted Mayor Curley to declare his intention not to give away any more keys to the city, on account of the competition from Lafayette Mulligan. He said he would wait until Mulligan died. Though in actuality Curley continued to give away keys to the city. There are records of him, in 1925, presenting keys to Chinese General Consul Ziangling Chang and to the Belgian ambassador.


The Search for Lafayette Mulligan
Mayor Curley demanded an investigation to find out the identity of Lafayette Mulligan. However, the search yielded no clues. At one point, Curley even employed the Burns Detective Agency to track him down. Britain's Scotland Yard also became involved, since they regarded it as a matter of national security to find out who had tricked the Prince.

The Boston Herald received a letter from Mulligan, with a return address of "Forty-two Beacon Street." This was the address of the Somerset Club, one of Boston's most exclusive clubs, of which Bayard Tuckerman was a member. Therefore, suspicion centered on the club. However, the members, including Tuckerman, denied any knowledge of the identity of Lafayette Mulligan. 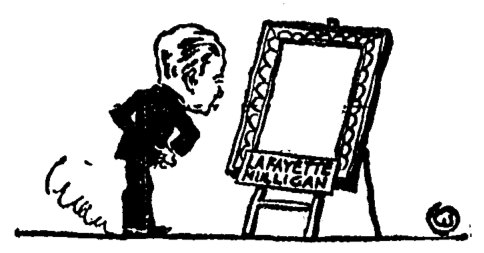 Illustration depicting the mystery of Lafayette Mulligan's identity
from The New York Times, Dec. 15 1929
The Mayor received a number of satirical letters from Mulligan. The correspondence was written on fine quality paper with Mulligan's name embossed in pale green. However, they contained no return address, and the post office was unable to track down their sender.

The identity of Lafayette Mulligan was never determined.

Curley went on to serve as Governor of Massachusetts from 1935 to 1937.


An Outbreak of Mulliganism in England
Soon after the Lafayette Mulligan incident had made headlines in America, the residents of Boston, England all received an invitation to the home of the Mayor and Mayoress of that town. The invitations stated that the reception was in honor of "the social secretary of the Mayor of Boston, Massachusetts, U.S.A."

Photographers and reporters were sent notices inviting them to appear. Caterers and merchants were also ordered to bring goods.

However, neither the invitations nor the delivery orders were genuine. It took weeks to sort out the resulting confusion.

William Ryan, a fifty-year-old Boston city lamplighter, was discovered to have been sending out letters to world leaders inviting them to attend Boston's three-hundredth anniversary celebrations. He had been sending out four invitations a day for an entire year. He seemed to believe he could single-handedly organize a "League of World Cities," and envisioned himself as an "apostle of world peace." On his letters, he used the slogan "City Hall, the Gateway to World Peace."

Ryan's activities were only found out when Boston City Hall began receiving acceptances from officials in cities such as Moscow, London, and Berlin. Government officials scrambled to uninvite everyone whom Ryan had contacted.