The Hoaxes of Jonathan Swift

Jonathan Swift (1667-1745) was one of the pioneers of satirical hoaxing. For instance, his most famous work, Gulliver's Travels (1726), ostensibly told the true story of an Englishman's travels to a series of incredible lands, but it actually was more of a comment on English society. Likewise, in A Modest Proposal for Preventing the Children of Poor People From Being a Burden to their Parents or the Country (1729), he pretended to make a serious case for the benefits to be had by feeding poor children to the rich, although he clearly was making a dark comment on the inhumanity of the rich towards the poor.

The above examples are more in the vein of satire than actual hoaxes, since the deception was fairly obvious. But he also perpetrated out-and-out hoaxes, such as his Bickerstaff hoax of 1708 in which he poked fun at astrology. Posing as the astrologer Isaac Bickerstaff, he managed to fool many people into believing he had accurately predicted the death of the famous astrologer, John Partridge, even though Partridge wasn't yet dead.

The Predictions of Isaac Bickerstaff (1708) 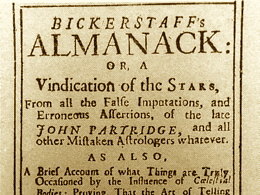 An almanac released by Isaac Bickerstaff in February 1708 predicted that a rival astrologer, John Partridge, would die on March 29 of that year. On March 31st Bickerstaff released a follow-up pamphlet announcing that his prediction had come true. Partridge was dead. However, Partridge was actually still very much alive. He was woken on April 1st by a sexton outside his window announcing the news of his death. Isaac Bickerstaff was actually a pseudonym for Jonathan Swift, whose intention was to embarrass and discredit Partridge, because he was annoyed by the astrologer’s attacks upon the church. More… 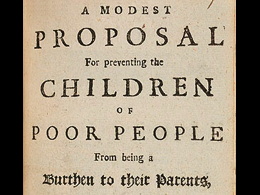 In 1729 Jonathan Swift anonymously published a short work titled A Modest Proposal for Preventing the Children of Poor People in Ireland From Being a Burden to their Parents or the Country, and For Making Them Beneficial to the Public. The essay proposed a radical solution to the problem of the numerous starving beggars and homeless children in Ireland — feed the unwanted babies of the poor to the rich. Swift didn't actually intend to promote class-based cannibalism. His point was to use satire in order to dramatize how the rich exploit and dehumanize the poor. But many readers failed to recognize this. More…