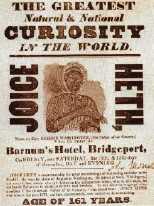 Joice Heth was an elderly black woman whom a young P.T. Barnum put on display in 1835, advertising that she was the 161-year-old former nurse of George Washington. Heth entertained audiences with tales about the young George Washington, and her exhibition drew substantial attention.

When the public's interest in her waned, Barnum rekindled its curiosity by spreading a rumor that Joice Heth was actually not a person at all, but instead a mechanical automaton. People then revisited the exhibit to determine for themselves whether she was an automaton or a real person. Barnum displayed her until February 19, 1836, on which day she died.

But even in death Barnum continued to use her to draw crowds. He allowed a public autopsy to be performed on her body, supposedly for the purpose of verifying her age. Unfortunately for Barnum, the doctor who performed the autopsy declared she could not have been older than eighty. Barnum struck back by planting a story in the New York Herald (February 27, 1836) explaining that the body that had been autopsied had not actually been the body of Joice Heth.

Barnum's collaborator in the scheme, Levi Lyman, later added another chapter to the saga by supplying the Herald with what he claimed was the real Joice Heth story. This ran in the Herald beginning on September 8, 1836 in a series of six articles. In this article, Lyman claimed that Barnum had discovered the elderly black woman on a plantation and had taught her to pretend she had been George Washington's nurse. But again, this story was also false. The truth was that Barnum had not found Heth on his own. Instead, he had simply bought the rights to exhibit Joice Heth from another showman. He had never coached her.
Links and References
Show Business 19th-Century Hoaxes (1800-1850) Robots P.T. Barnum Imposters
Tweet