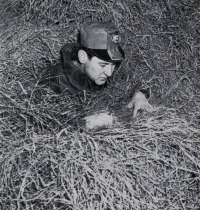 Searching for a needle in a haystack
Jim Moran (1907-1999) was called, at various times, "super salesman number one," "America's No. 1 prankster," and "the last great bunco artist in the profession of publicity." He became famous during the 1930s and 40s for devising outrageous stunts on behalf of his clients. His favorite technique was to test the validity of popular sayings. For instance, he sold an icebox to an eskimo, found a needle in a haystack, and walked a bull through a china shop.

Typically his stunts were in the spirit of tongue-in-cheek performances, but occasionally he perpetrated outright hoaxes, such as when he submitted one of his own works to the Los Angeles Art Association, telling them it was a painting by an obscure artist named Naromji.


A chronology of Jim Moran's Stunts

August 1938: Traveled up to Juneau, Alaska where he sold an icebox to Charlie Pastolik, an Eskimo. He then returned to Hollywood with 200 pounds of Arctic ice, claiming it was the purest ice in the world. He sold 10 pounds of it to an actress who used it for facial treatments.

February 1939: Searched for a needle in a haystack. The search took him 82.5 hours before he finally found it "near the bottom and slightly to the left of center." Pranksters tried to set fire to the haystack five times while he was in it. Motorists also woke him at 3 a.m., honking and shouting "Hay! Hay!" He sent the found needle to the Smithsonian Institution.

May 1939: Hired near-sighted and far-sighted men to reenact the battle of Bunker Hill, in order to test Col. Prescott's strategy that the rebels should not fire until they saw "the whites of their eyes." He concluded that the rebels lost the battle because of this order, noting that the near-sighted rebels "had their ears cut off by the 'Bleary-eyed' redcoats' bayonets before they even got a glimpse of the whites of any eyes."

January 1940: Led a bull through a New York City china shop. The bull did not damage anything. However, some china was broken when Moran's client nervously backed into a table.

November 1941: Did a series of radio shows in the guise of Prof. Rhinelander Briggs of the Great Slo-Gro Corporation of America. "Slo-Gro," he claimed, "slows down the growing speed of your hair... it is odorless and homogenized and contains a generous amount of Vitamin B1, as well as a mild solution of analgesic aseetal sylicitate."

March 1946: Tried to convince Howard Hughes to build a rocket ship to fly him to the moon so that he could sell green cheese there. He said that he planned to take Orson Welles with him because "I should give Welles a chance to see if those other-world people he scared everybody with over the radio really exist." Hughes turned down the request. His spokesman commented, "Moran's looney."

October 1944: During the 1944 presidential campaign he proved it was possible to change horses in midstream, by doing so in the middle of Nevada's Truckee River.

June 1946: Sat on an ostrich egg for 19 days, four hours, and 32 minutes in order to hatch it. He did so while wearing a feather head piece with a foot-high ostrich plume. The stunt was designed to promote the movie The Egg and I. The baby ostrich, when hatched, was named Ossip Moran. He donated it to a zoo.

November 1946: Tricked the Los Angeles Art Association into displaying an abstract painting of his own creation, described by him as "the worst thing I could think of." He disguised it as the work of a previously unknown artist, Naromji (Moran spelled backwards, with a 'ji' added for confusion).

1947: During the Crown Prince of Saudi Arabia's trip to the United States, Moran showed up at Ciro's restaurant in Hollywood, disguised as the Prince. He was accompanied by a retinue of guards and servants (his accomplices also in disguise). During his meal, he tipped the waiters and band members with large gems. On his way out, the goatskin bag holding the gems "accidentally" broke, scattering jewels all over the floor. One of his servants started to pick them up, but Moran imperiously waved his hand to signal him to stop. Picking up jewels was beneath the dignity of a Prince. Then he left the restaurant. Upon his departure, the Hollywood elite dining at the restaurant immediately scrambled to snatch up the jewels, all of which were actually dime-store trinkets of no value. (The scattered jewel prank has been attributed to many other practical jokers, and is something of an urban legend. Many versions of the tale have it occurring in a jewelry store such as Tiffany's or Cartier's. But H. Allen Smith claims there are pictures that prove Moran actually did carry out this prank.)

April 1951: Unveiled a plan to sell advertising space on signs held by midgets who would be flown on kites over Central Park. One of the participating midgets was a 50-year-old grandmother. He claimed that the stunt would not only create good publicity for his clients, but would also provide employment for out-of-work midgets. However, when he showed up in Central Park, the police refused to allow him to carry out his plan, citing safety concerns. This led Moran to exclaim, "It's a sad day for American capitalism when a man can't fly a midget on a kite over Central Park." He next tried to carry out his plan in Van Courtland park in the Bronx, but authorities there also denied him permission.

May 1958: Arranged for a woman to leap onto the stage during a performance of "Look Back in Anger" and start castigating the lead actor, screaming, "How dare you treat your wife that way, you miserable cad!"

October 1959: To promote the movie The Mouse That Roared (about a tiny country that declares war on the United States in order to be defeated and then get foreign aid), he posed as the Ambasador of the Grand Duchy of Grand Fenwick. He was driven around town in a chauffeured, open-top limousine with fake diplomatic license plates, wore a Grandy Duchy of Fenwick uniform, and hosted a ball that many real ambassadors attended.

December 1975: To promote the movie The Black Bird, he conducted a nationwide search for a black bird able to recite the line, "I saw The Black Bird." The bird, he said, would be featured in a television commercial.
Links and References
Advertising Hoaxes Pranks Pranksters
Tweet