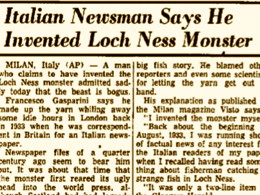 Italian newsman Francesco Gasparini claimed in an article published in the Milan weekly magazine Visto that he had invented the Loch Ness Monster. His story was that in August 1933, while working in London as a UK correspondent for an Italian newspaper, he saw a two-line item in the Glasgow Herald about a "strange fish" caught in Loch Ness. Having nothing else to write about, he expanded on this, turning the fish into a monster, and soon "other papers began to print eyewitness accounts of the monster being sighted." Gasparini's claim was not taken very seriously. "The man is talking rot," one Scot was quoted as saying.
Loch Ness Monster Hoaxes
Tweet