In 1930 Republican leaders throughout the United States received letters inviting them to a May 26 party at Cornell University in honor of the sesquicentennial birthday anniversary of the esteemed Hugo Norris Frye, aka Hugo N. Frye. The letter, anticipating its recipients might not be fully aware of who Hugo N. Frye was, summarized his contributions to U.S. history:


"This little-known patriot of Central New York has been deprived of the fame that should have been his for his part in the organization of the Republican Party in New York State. Born on a little farm in the struggling hamlet of Elmira, near the scene of Sullivan's encounter with the Indians, Frye served his country in the War of 1812, and returned to take a humble but active part in the political life of his community.

From his opposition to the Mexican War was born the idea of a political party that would incorporate the principles of protection for our industries and freedom for the Negro. His slogans: 'Protection for our Prosperity' and 'Freedom in the Land of the Free' became the rallying cry of those honest farmers who later became the nucleus of the Republican Party in the Empire State." 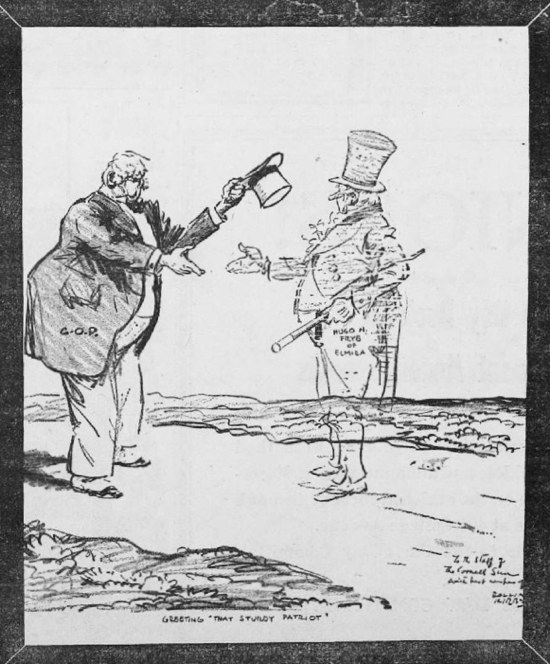 Depiction of Hugo N. Frye, by Roland Kirby, cartoonist for the New York World
The Politicians Respond
None of the politicians could make it to the event, but almost all of them replied, expressing their regret at being unable to attend but also noting their sincere admiration for Frye. For instance, Secretary of Labor James Davis wrote, "It is a pleasure to testify to the career of that sturdy patriot who first planted the ideals of our party in this region of the country. If he were living today he would be the first to rejoice in evidence everywhere present that our government is still safe in the hands of the people."

Vice President Charles Curtis wrote, "I congratulate the Republicans on paying this respect to the memory of Hugo N. Frye and wish you a most successful occasion."

Claudius Hart Huston, Republican National Chairman, praised Frye, saying, "Our country has been providentially favored in every crisis in not only having men who were willing to espouse the cause they were convinced was honorable and just, but who were willing to bear the brunt of being in the forefront of economic and political thought."

Congresswoman Ruth Pratt (the first congresswoman to be elected from New York) replied, "Greetings and all good wishes to all of you who are gathered to pay tribute to the memory of Hugo N. Frye. I wish it were possible for me to be with you."


You Go And Fry!
Unfortunately for the Republican leaders who responded, Hugo N. Frye didn't exist. He was the satirical creation of two student editors at the Cornell Sun, Lester Blumner and Edward Horn, authors of the "Berry Patch" humor column. Hugo N. Frye was shorthand for "You go and fry!"

When May 26 arrived, the Hugo N. Frye Sesquicentennial Committee hosted a celebration. The laudatory comments written about Frye by the Republican politicians were solemnly read out, to the accompaniment of laughter and applause. And the next day, the Cornell Sun ran a gloating headline on its front page, "Vice-President Curtis, Prominent Republicans Acclaim Fictitious Party-Hero, Hugo N. Frye." 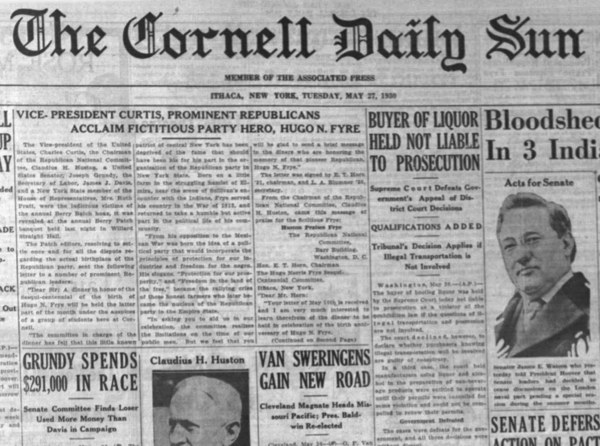 Reaction
Within a day news of the prank had spread to the national press, and for the next week Republican leaders were the brunt of jokes throughout the nation.

Senator Harrison, a Democrat, read a newspaper article about the hoax on the floor of the Senate, in the presence of Vice President Curtis. The New York Times reported, "Mr. Curtis, rubbing his hand over a grinning face, finally joined in the outburst as he rapped for order. Harrison remarked, in offering the newspaper story, that 'You go and fry' is a very appropriate name for a Republic organization." For weeks afterwards, Democrats continued to remind their Republican colleagues of the great example set by that "sturdy patriot" Hugo N. Frye.

Congresswoman Pratt took the joke in good humor, saying, "I'll admit the joke was on me." However, Secretary Davis complained that his good nature had been imposed upon.

Overall, the reaction of the media was very positive. The New York World, noting the "sleazy kind of fawning" generally practiced by politicians, expressed its pleasure at seeing the political establishment "trip its toe and come sprawling on its face." 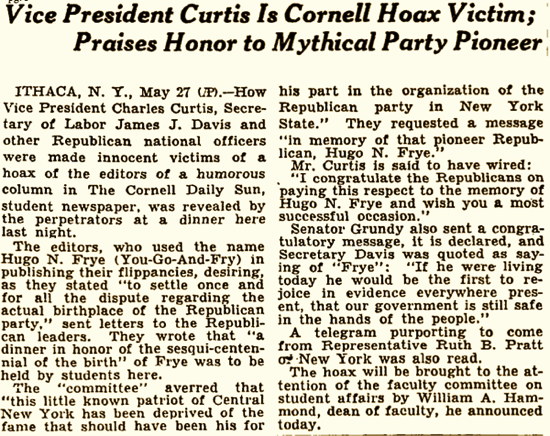 New York Times, May 28, 1930
Apology
For a while Horn and Blumner basked in the national appreciation of their prank. But soon Cornell's administration decided it should not appear tolerant of such activity and pressured the pair into sending a letter of apology to their victims. The letter read:


"We regret that what was intended as a campus prank should have been given such wide publicity. We intended no disrespect to you, your office, or the Republican party, and sincerely apologize for any annoyance we may have caused. We appreciate your good sportsmanship."
Reportedly the Hearst newspapers offered Horn and Blumner $500 for the originals of the letters, but fearing Cornell's reaction should the prank continue on any further, the two turned down the money and ceremonially burned the letters as a crowd looked on.

Lester Blumner later served as a corporal in North Africa with the U.S. Army.


Later Instances of Hugo N. Frye: John "Hugo N. Frye" Patric
The expression "Hugo N. Frye" received press coverage over thirty years later in a completely different context when, in 1962, author John Patric was prosecuted for signing an initiative petition with "other than his true name." The name he used was "Hugo N. Frye."

The petition in question was sponsored by the League of Women Voters in order to place Initiative Measure No. 211 on the Nov. 6, 1962 Washington state election ballot. One petition form had been placed in the Sheriff's office.

According to the charges filed against him, on May 1, 1962 Patric was in the sheriff's office. In the presence of Officer Gwynn Symmes, he signed the petition as "Hugo N. Frye, 301D Free Press Park, Snohomish." Officer Symmes, believing that a felony had been committed, subsequently gave the signed document to a prosecuting attorney.

Patric pleaded not guilty. He admitted he had signed the petition as "Hugo N. Frye," but argued that this had long been his pen name.

This was certainly true. Patric published his own magazine, The Saturday Evening Free Press, in which he signed his articles with this name.

Patric was known for his non-conformist views. He said of his writing, "I try to keep it slanderous. Failing that, I strive for blasphemy. Anything but the truth." Patric also frequently ran for political offices such as Governor and U.S. Senator, and he always filed as John "Hugo N. Frye" Patric. He never won, but he made himself familiar to the bureaucrats in the Election Office by insisting on paying his filing fee entirely with loose change. Patric once commented, "I run for every office available. Wait, check that. I file for every office. I don't run. I don't even crawl. It's just sort of a public service in case someone wants to vote for me."

Despite this history of using the name, a jury found Patric guilty, which carried a sentence of up to ten years in jail. Patric appealed, and upon appeal his sentence was overturned. The court ruled that the form he signed never achieved the status of a legal petition, because it had not been returned to the League of Women Voters, and thus was never submitted to the secretary of state for filing. His sentence was suspended on condition that he spend 20 days in county jail and maintain "a certain minimum of decency and respect for others."
Links and References
Fictitious Persons Political Pranks Student Pranks Hoaxes of the 1930s
Tweet

My parents and Dad's sister Violet Wold were friends with Jim Patrick, John Patric's brother. The brothers spelled their last name differently. When I was 16 years old, I accompanied Dick Patric, son of Jim, to visit John Patric at his Victorian style house in Snohomish, Wa. During the visit, I was ignorant of John Patric's travels in the Orient, authoring several books, and lead articles for the National Geographic. Now 75 years old myself, I have come to appreciate the Patric/Patrick family which bordered on eccentric and genius. I remember John Patric, 'Hugo N. Frye' being a smallish man, with an untrimmed goatee mustache, stained from pipe smoking; he talked in rapid staccato, evidence of a quick mind. John Patric was
never married. He reportedly regarded women as a waste of time and energy. No woman would tolerate the eccentric John Patric. The Patricks/Patric were early inhabitants of Snohomish, WA where John's father, Bill, ran a hardware store for years. Dick Patrick, son of Jim, was brilliant in high school math classes I shared. Jim and Nadine had a good looking daughter, named Carol. My family used to visit Jim Patricks summer home on Lake Stevens, WA.
Patricks had among the first television sets in Everett, WA. rla

Posted by ron andersen  on  Mon Aug 26, 2013  at  11:05 PM
My great grandfather Theodore "Ted" Anderson used to have a barbershop in Everett, WA which the late Mr. Patric used to frequent. My dad recently told me some of his stories, so I just ordered his book from Amazon. My copy arrived complete with an inscription from the author "To Nella Jo DuVall: I hope that you become a hobo yourself! There are lot's of gov't agents (maybe too many) but there's a worldwide shortage of good looking lady hobos""
Posted by Bryce  on  Sat Mar 07, 2015  at  02:52 PM