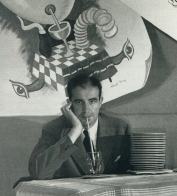 Hugh Troy in front of
one of his murals.
Rockefeller Center, NY, 1940.
By trade Hugh Troy (1906-1964) was an artist. He illustrated many children's books, including "Maude for a Day," "The Chippendale Dam," and "Five Golden Wrens." But by nature he was a practical joker, with numerous pranks to his credit. When asked once what advice he would give to aspiring practical jokers, he replied that one should never sit down and try to deliberately think up a practical joke. This was a sure way to arrive at uninspired ideas. Instead, a prankster needs to seize the moment, grabbing opportunities as they arise.


Campus Pranks
Hugh Troy got his start as a prankster while a student at Cornell University. His most famous prank there involved creating a trail of rhinoceros footprints in the snow using a hollowed-out rhino-foot wastepaper basket.

Another of his campus pranks involved a professor who used to leave his black rubber boots out to dry by the classroom door while he was lecturing. One day Troy secretly spirited the boots away, painted them to look like feet, hid his artwork with black soot, then placed them back by the door. When the professor put the boots back on and walked outside, the soot washed away, making it look like the professor was walking around barefoot.

While working as the student sports reporter at Cornell, Troy invented a character named "Johnny Tsal". Tsal was a poor wretch who would inevitably finish last in whatever race that Troy was assigned to cover. ('Tsal' was 'last' spelt backwards.) Troy said he invented this perpetual loser so that he wouldn't have to feel bad about reporting someone's defeat.

One of his pranks eventually got Troy in trouble. He printed a fake newspaper, the Cornell Globe and Square Dealer, with the headline, "President breaks wind for new aeronautical college." The headline so annoyed the administration that they suspended Troy for a term.


The New York City Years
After graduating from Cornell in 1927, Troy moved to New York City to find work as an artist. One day he went down to Central Park and sat for a while reading on a park bench. When he was done, he nonchalantly picked up the bench and began to carry it away. He didn't get very far before a policeman stopped him, hauled him into the police station, and charged him with stealing public property. At which point, much to the confusion of the police officers, Troy whipped out a sales receipt. It turned out that he owned the bench. He had purchased it at a store the day before and left it in the park, just so that he could 'steal' it later.

Another time, Troy and a friend dressed up as city workers, placed 'men at work' signs on a busy street, and started to dig a hole. The police eventually arrived and, believing they were real city workers, obligingly began to divert traffic around them. Once they had dug a good-sized hole, Troy and his friend gathered up their tools and left. The puzzled police officers continued to stand there diverting traffic.

In a similar prank, Troy and an accomplice dressed in workmen's clothes, took ladders into the lobby of the Waldorf-Astoria Hotel, and calmly began to remove all the light bulbs. They proceeded to remove every single bulb, and then they left. No one ever asked them what they were doing or tried to stop them.

To get even with the manager of a Greenwich village movie theater who had annoyed him, Troy took a jar of moths with him into the opening night premiere of a Greta Garbo film. Troy waited until the moment when Garbo was kissing Melvyn Douglas, then he opened the jar. All the moths immediately flew toward the light of the projector, obscuring the film.

Troy's most famous New York City prank occurred in 1935, when he fashioned an ear out of dried beef and placed it in the Museum of Modern Art's Van Gogh exhibit, beside a sign describing it as the ear Van Gogh cut off and sent to his mistress.


The War Years
During World War II, Troy served as a captain in Army Intelligence, participating in the Guam campaign. But he was initially posted to an officers' training camp in the South. Tiring of the endless paperwork, he started submitting Flypaper Reports to the Pentagon, detailing the number of flies caught by flypaper in the mess hall. Reportedly, the Pentagon soon was requesting that all officers submit similar reports.

While in the South Pacific, he was asked to help a folklorist who had arrived to document native tales. Thinking it was a frivolous activity during a bombing campaign, Troy persuaded a local boy to invent tales to tell the folklorist. The folklorist eagerly transcribed the tales and returned home thinking he had stumbled upon the find of his career.


The Washington Years
Troy moved to Washington DC in 1951 where he worked for the Central Intelligence Agency. A year after moving there, he placed a small ad in the Washington Post promoting the services of a company of "Ghost Artists." Their motto was "We paint it, you sign it!" He received numerous inquiries from prospective clients.

His most famous pranks are listed below.
Pranksters Serial Hoaxers
Tweet