The Giant Penguin of Clearwater, Florida 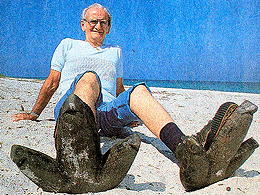 In February 1948, giant three-toed footprints were found on a Florida beach. They looked like they had been made by an enormous sea turtle, except for the fact they were spaced too far apart. Over the following months, more prints continued to be found. In Nov. 1948, naturalist Ivan Sanderson examined some of them and speculated they had been made by a "vast penguin," 15-feet tall. The mystery wasn't fully solved until 1988 when a local prankster, Tony Signorini, admitted he had made them with the help of a friend. He had strapped cast-iron monster-print shoes to his feet and then stomped up and down along local beaches. [Tampa Bay Times, Orgone Research]
Cryptozoology
Tweet