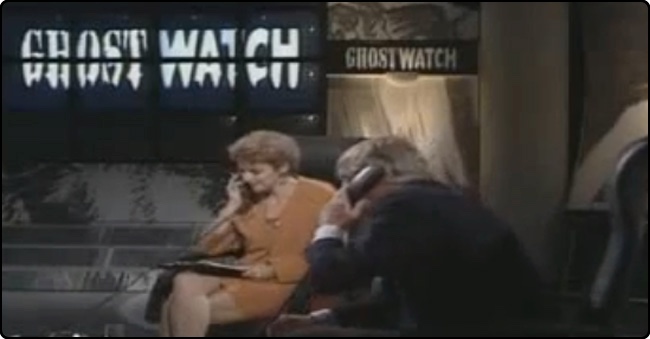 On 31 October 1992, Britain's BBC TV aired a 90-minute documentary called Ghostwatch. The program was advertised as a live investigation into reports of supernatural activity at a council house in North London. The show was anchored by a group of well-known television reporters: Michael Parkinson, Sarah Greene, Mike Smith and Craig Charles.

Michael Parkinson and Mike Smith both reported from a TV studio, where calls were being taken from the public. Experts on supernatural activity were interviewed via a satellite hook-up. Sarah Greene and Craig Charles reported live on location from the house itself.

A single mother, Pam Early, and her two daughters, Suzanne and Kim, lived in the home. Around December 1991, it was said they had begun to witness strange phenomena: furniture moving of its own accord, apparitions floating through the air, and the sound of something banging against a metallic surface. The older daughter, Suzanne, also began to experience cuts and lacerations on her body. The family called the spirit that was menacing them 'Pipes' because of the metallic banging sound it made whenever it manifested itself.

The Early Family
The documentary began by introducing the family and the house. An expert in parapsychology was shown, Dr. Pascoe, who explained what she knew about the case. As the camera moved about the house, mysterious noises were soon heard, but it turned out that they were being produced by Craig Charles who was playing a prank on the crew.

However, events quickly took a more sinister turn. A wet patch appeared in the middle of the carpet. The noise of cats was heard emanating from the walls, and scratches appeared all over body of the young girl, Suzanne.

Meanwhile, live interviews with neighbours were unearthing some disturbing facts about the history of the house. Apparently a former resident had once hanged himself beneath the stairs, claiming that he had been possessed by the spirit of a woman. The man had owned twelve cats, and when he died the cats were locked inside the house without a source of food. Consequently, they had attempted to feed on his dead body.

Events inside the house rapidly went from bad to worse. Suzanne and Kim began channelling the spirit of 'Pipes,' screaming out phrases in the spirit's voice, such as "he's hurting me." Then chaos broke loose and everyone fled the house except for Sarah Greene who was shown searching for Suzanne in the cellar while the sound of howling cats echoed around her.

Michael Parkinson
Outside the house, Dr. Pascoe appeared to have realized what had happened. "Jesus, Michael," she reported. "We have created a seance, a massive seance..." Apparently by having a live, national audience watch the investigation, the reporters had managed to channel enormous psychic energies into the house, amplifying the powers of the spirits who were now unleashed upon England.

Suddenly the picture from the house went dead, and the broadcast shifted back to the TV studio. Here events were also taking a turn for the worse. A wind had kicked up inside the studio and suddenly the lights went dead. The howling of cats was heard, and in the final, chilling image, a camera revealed that the anchorman Michael Parkinson had himself become possessed by the spirit of 'Pipes' and was reciting nursery rhymes in the voice of the spirit.


Reaction
The program elicited a huge, national reaction. Many viewers phoned the police and warned them that the forces of darkness had been unleashed upon the nation. Some women reportedly were so scared that they went into labour, and rumors circulated later that a few teenagers had committed suicide.

However, there was nothing real about the show. It had been entirely staged. In fact, it had been filmed months before by the BBC's Studio One. Terrified viewers might have realized this had they watched the credits more closely which clearly revealed that the entire show was scripted.
Links and References
Television Hoaxes Hoaxes of the 1990s Hoaxes by Journalists Ghost Hoaxes
Tweet

i was only young watching this but i really enjoyed the show being only 14 at the time i believed it real, but i clocked on to the credits at the end. My sister 3 years my senior was absolutly terrified she was babysitting me and my brother at the time. excellent, stick it back on see what reaction you get now adays. Are people still as gullible?
Posted by sally  on  Tue Feb 01, 2005  at  03:17 PM
I bought the dvd not so long ago. I sat down to watch it - then had to switch it off, it was too terrifying. I think it's because everyone and everything in it seems so ordinary, and the events are so subtly done that it's so scary.

The night it was on, I sat with my three friends watching it, and once it was over, we all had to go to the toilet - but were too scared to go out into the dark hallway. Also, my memory of this was that it lasted 3 or 4 hours, but in fact, it was only 90 minutes.

The guy who wrote Ghostwatch is Stephen Volk, who wrote the recent series Afterlife - which I had to record, and watch in the daylight, otherwise it gave me nightmares.

Posted by Nona  on  Sat Mar 10, 2007  at  12:05 PM
I was only 7 when this was aired and I was terrified! I refused to sleep the whole night and had the light on. I was convinced eyes were watching me and something would come to get me. I watched it with my dad and he was laughing he knew it was a hoax but I believed it was all true. Sarah Green didnt appear on live and kicking the next morning and I honestly thought she was dead! I watched parts of it now and I even though I know its a hoax,but it still gives me goose bumps.......
Posted by Christina Hooper  on  Sun Jan 13, 2008  at  12:49 PM
Ghostwatch was not a hoax. It was a drama which used documntary as its structure. It was, I think, part of the Screen One series of plays that BBC1 were phasing out, alas. Indeed, the Screen One ident was ran before the play began, and the Radio Times covered it - but as I recall, it interviewed the four 'presenters' and just talked about their belief or lack of it in the supernatural...

Indeed for the makers of the play, the word 'hoax' never crossed their lips.

But it was SUPERB!! I tuned in half way through, a tad drunk after an early night in the pubs and thought 'I thought this was a play?' It was only when I recognised the actress playing Dr Pascoe had been in a sitcom called Shelley only a few weeks earlier that I relaxed. That's how good it was in conveying its atmosphere.

Sorry to harp on, but most of the fuss came from those afterwards who couldn't tell it was a drama, and not reality. Like most of us!
Posted by Michael  on  Mon Mar 02, 2009  at  06:29 PM
I got FREAKED out what I saw this, I was 11. Had to have the light on and door open for ages after. I was watching it at a family friends house too so had to call my mum to pick me up less I walk hoe in the dark and all the ghosts!

The thing was, It was so convincing, TV personality I knew and trusted.