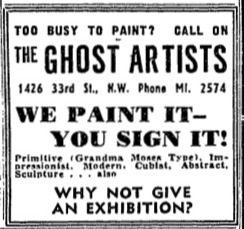 On February 5, 1952, a small ad ran on the theatrical page of the Washington Post offering the services of a company of "ghost artists": "Too busy to paint? Call on the Ghost Artists? We paint it, you sign it."

The idea of ghost artists caught the interest of the media, and a report about the company went out over the wire services and appeared in newspapers nationwide. The ghost artists were said to be earning lucrative fees from executives who wanted to impress their friends. Satisfied clients included military men, government officials, doctors, businessmen, and a Wall Street broker who commissioned an entire exhibition in order to break into "arty circles."

The Washington Post devoted an editorial to the organization, concluding, "After some reflection, we can't see anything morally amiss about this proposal. Nobody thinks it scandalous when a Washington hostess invites a few politicians, diplomats, syndicated newspaper columnists and their ladies to dinner and then turns the whole responsibility for feeding them over to a professional caterer... Why then should we shake our heads if a man wants to hire a private gallery and invite his friends to admire pictures painted for him by somebody else?"

Not all were impressed by the concept. One correspondent to the Post's Letters to the Editor declared, "This is a sad commentary indeed on the manners and mores of the Nation's Capital in this year of our Lord!"

But when news of the Ghost Artists reached New York, some reporters recognized the name of its spokesman and warned the wire services, who then put out a retraction: "We are withdrawing story on ghost painters... source has reputation of being a practical joker."

The source was the prankster (and professional illustrator) Hugh Troy. It was later reported that he received over fifteen serious offers from clients interested in hiring a ghost artist.
Links and References
Advertising Hoaxes Art Hoaxes of the 1950s Journalists Hoaxed Hugh Troy
Tweet