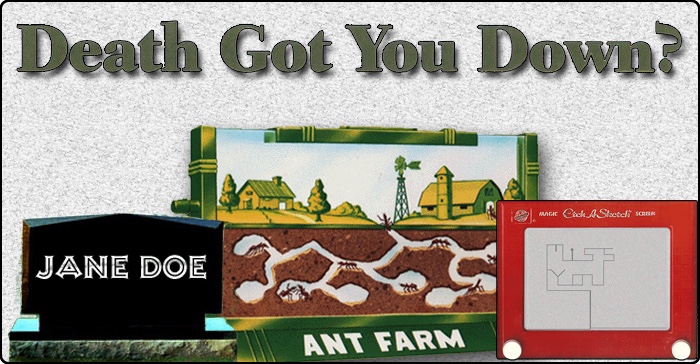 In March 1999, an ad appeared in a variety of weekly magazines, such as the L.A. Weekly and the Village Voice. It read, "Death got you down? At last an alternative! www.finalcurtain.com"

The website that it led to announced the imminent launch of a novel kind of cemetery. At the Final Curtain Cemetery artists would be allowed to design their own graves before they died. The result would be a cemetery that would be part memorial, part art gallery, and part theme park. As the website explained:


"Death faces all of us. But there's a lack of imagination which accompanies our passage. Until now, the handling of death has been regimented and boring; limited by those who control it, whether the State, church, morticians, or our survivors. At The Final Curtain, we are throwing away all the rules."
The Business Plan
The plan was to build the first Final Curtain in New York, however more would soon follow in locations around the world. This world-wide span would offer people a novel option—if they wished, they could choose a time-share option in which their remains would be shipped from one Final Curtain to another, all around the world, for the rest of time.

Included on the website was an official business plan. This explained that funding for the construction of the cemeteries was initially being provided for by a New Jersey company called Investors Real Estate Development. It also noted that "death is a growth business," and imagined that Final Curtain cemeteries might profit by the "creation of a theme park-like environment that will attract visitors beyond just the friends and families of the deceased." Visitors to the cemetery could dine at restaurants on the site, such as Dante's Grill and the Heaven's Gate Cafe, and shop at the museum gift shop.

Ant Farm Tombstone
Ads continued to appear in various publications, and soon newspapers, magazines, TV and radio stations were all reporting about this unusual cemetery concept. The list of those who reported about it included Mother Jones, the New York Daily News, the Boston Herald, the Village Voice, NPR, Fox-TV, and the L.A. Times.

In October, 1999 the management of the Final Curtain issued a press release announcing they had been contacted by the maker of Uncle Milton's Ant Farms concerning their use of the trademarked term "Ant Farm" on their website. The maker of the Ant Farms had pointed out to them that "'Ant Farm' is not a descriptive phrase but is an incontestable trademark that identifies Uncle Milton Industries."

The brewing litigation between Final Curtain and Uncle Milton's Ant Farms attracted more media interest, including an October 22 article in the L.A. Times.

By May, 2000 almost 40 newspapers, 19 radio stations, 10 magazines, and 6 television stations had all reported about Final Curtain. Two European TV crews had even requested to shoot a documentary about it, and a student at the University of Chicago had requested to use Final Curtain as the basis of her graduate thesis.


The Hoax Revealed
On Mother's Day, May 14, 2000, Final Curtain issued its final press release. In it, it revealed that its existence was an elaborate hoax.

The hoax was the brainchild of Joey Skaggs, who had been staging hoaxes for over thirty years. For this effort he had enlisted the help of dozens of friends who helped him design the extensive website and issue the press releases. Reporters who called the number listed on the Final Curtain website found themselves speaking to either a 'marketing director,' Stuart MacLelland, or a 'company spokesman,' Paul Corey. Both of these were actually Skaggs himself.

Skaggs explained in his press release that he intended his hoax to be viewed as a form of performance art. However, he also wanted to draw attention to the death-care industry which he described as "a giant corporate scam, exquisitely successful at commercializing death."