The Coudé catheter is a catheter with a curved tip, used in urology to facilitate insertion of the catheter tube through the urethra into the bladder in order to relieve urinary obstruction. The Winter 1957 edition of The Leech, the journal of the students' society of the Welsh National School of Medicine at Cardiff, contained a brief biography of the Coudé catheter's inventor, Emile Coudé. 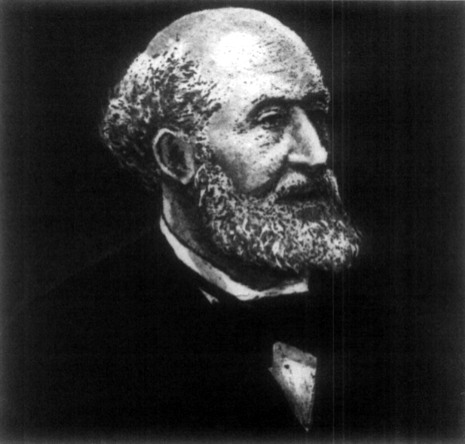 Emile Coudé
According to the article, Coudé (1800-1870) was born the son of a French country doctor in the town of Villeneuve-la-Comtesse. In 1832 he accepted a post of assistant surgeon at Niort, and it was here he invented the catheter that bore his name:


In cases of retention of urine, he found that catheters then available were difficult to use, being either perfectly straight and rigid, or else, as he put it in his memoirs, "bent to many weird shapes as if a catheter should copy exactly the bends of the male urethra."

After trying many different designs, he hit upon the well-known "biCoudé" catheter. Other doctors referred to it as the "Coudé" catheter but its inventor's natural modesty caused him to add "bi" (because it had two bends) in order to hide his name. The first published description of the instrument appeared in 1835.
A woodcut picture of Coudé accompanied the article.

Soon after this, details of Coudé's biography made their way into Sir Hamilton Bailey's textbook, A Short Practice of Surgery. However, while the textbook was in galleyproof, but before publication, Bailey realized that, although the article in The Leech about Coudé was "written in a serious and restrained vein" it was actually "a fabrication." 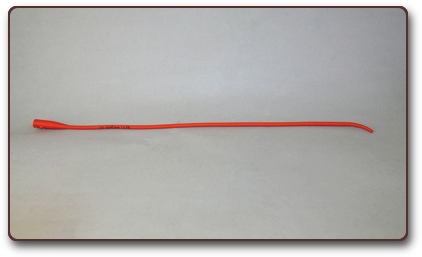 A coude catheter
Bailey submitted a letter, co-signed by W.J. Bishop (editor of Medical History) and A. Clifford Morson (President of the Societe Internationale d'Urologie), to both the British Medical Journal and the Lancet, protesting the deception. He noted that several pages of his book "had to be reset in so far as the capital C of Coudé is concerned, and biographical footnotes to Emile Coudé deleted." He also sent the letter, he said, "to save others from falling into this mire."

Bailey's letter prompted a reply, a week later, from a correspondent identifying himself as Hercule Coudé, grand-nephew of Emile:


Sir,—I am a French surgeon who makes this holiday in your so beautiful country and I borrow the pen of my landlady to write to you very quick because I see in your journal a letter which makes me very sad. I think the three gentlemens which write this letter essay to kill in one foul swoop, as you say in your language, so expressive, the sacred memory of the illustrious Emile Coudé, of who I have the honour to be the grand nephew. It is only last week ago when my assistant at the Salpetriere say to me that there is a patient who cannot pass the water in the antechamber. "The catheter" I cry. "Alas" responds he "I have already try" showing me the straight catheter of M. Jaques. "Imbecile! give me the catheter of my Uncle Coudé" — at last! the water she come and again a little more of glory is added to a name which the Societe Internationale d'Urologie should revere but would make to fall into the mire. "Over my dead corpse" I cry and sign myself — Hercule Coudé
Raphael Pash, author of the original Leech biography of Coudé, also sent a letter to the Lancet arguing, "I feel that to call the article a 'deception' or 'hoax' is unfair. None of the Cardiff students did anything to bring the article to the attention of anyone connected with A Short Practice of Surgery."

The curved-tip catheter was actually invented by the Paris urologist Louis Mercier (1811-1882). Coudé is a french word that, as a noun means 'elbow,' and as an adjective means 'bent'.

Some present-day medical reference sources (such as here) still mistakenly claim that the coude catheter was named after a French physician.
Links and References
Fictitious Persons Medical Hoaxes Hoaxes of the 1950s Satirical Scientific Hoaxes
Tweet