The December 13, 1884 issue of the journal Medical News included a letter from a correspondent who identified himself as Dr. Egerton Yorrick Davis. The letter described "an uncommon form of vaginismus" that the doctor had been summoned to treat.


Dear Sir:
The reading of an admirably written and instructive editorial in the Philadelphia MEDICAL NEWS for 24th November, on forms of vaginismus, has reminded me of a case in point which bears out, in an extraordinary way, the statements therein contained. When in practice in Pentonville, Eng. I was sent for, about 11 P.M., by a gentleman whom, upon arriving at his house, I found 10 a state of great perturbation, and the story he told me was briefly as follows:

At bedtime, when going to the back kitchen to see if the house was shut up, a noise in the coachman's room attracted his attention, and, going in, he discovered to his horror that the man was in bed with one of the maids. She screamed, he struggled, and they made frantic efforts to get apart, but without success. He was a big, burly man, over six feet, and she was a small woman, weighing not more than ninety pounds. She was moaning and screaming, and seemed in great agony, so that after several fruitless attempts to get them apart, he sent for me. When I arrived I found the man standing up and supporting the woman in his arms, and it was quite evident that his penis was tightly locked in her vagina, and any attempt to dislodge it was accompanied by much pain on the part of both. It was indeed a case of "De cohesione in coitu." I applied water, and then ice, but ineffectually, and at last sent for chloroform, a few whiffs of which sent the woman to sleep, relaxed the spasm, and relieved the captive penis, which was swollen, livid, and in a state of semi-erection, which did not go down for several hours, and for days the organ was extremely sore. The woman recovered rapidly, and seemed none the worse.

I am sorry that I did not examine if the sphincter ani was contracted but I did not think of it. In this case there must have been also spasm of the muscle at the orIfice, as well as higher up, for the penis seemed nipped low down, and this contraction, I think, kept the blood retained and the organ erect. As an instance of Jago's "beast with two backs," the picture was perfect. I have often wondered how it was, considering with what agility the man can, under certain circumstances, jump up, that Phineas, the son of Eleazer, was able to thrust his javelin through the man and the Midianitish woman (vide Exodus); but the occurrence of cases as the above may offer a possible explanation.
Yours truly,
EGERTON Y. DAVIS
Ex. U.S. Army

In reality, this medical case never occurred. The location of the incident in Pentonville provided a somewhat obscure hint that the case was a joke, since Pentonville was most famous for Pentonville Prison, the first modern prison in London. Thus, it served as a fitting location for a case of penile incarceration.

Nor was the author of the letter, Dr. Egerton Yorrick Davis, a real person. He was the pseudonym of Sir William Osler (1849-1919), who is regarded as one of the most highly respected figures in modern medical history. 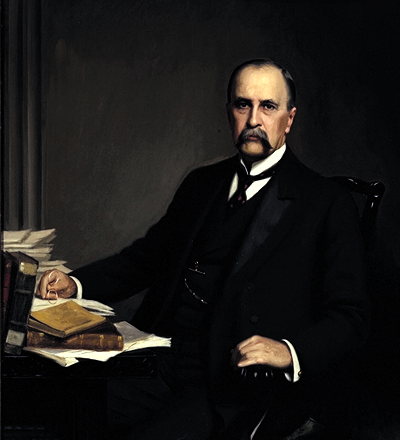 William Osler at his desk
Dr. Osler served for many years as Professor of Medicine at Johns Hopkins University and was instrumental in founding the Rockefeller Institute for Medical Research in New York City. But throughout his illustrious career he had a habit of submitting bogus letters to medical journals under the pseudonym of Dr. Egerton Yorrick Davis.

These letters often dealt with sexual subjects, such as the 1884 letter to the Medical News. Similarly a 1903 letter to the Boston Medical and Surgical Journal titled "Peyronie's Disease—Strabisme du Penis" described "an old codger" who experienced "a most remarkable change in his yard."

Apparently these bizarre (and fictitious) sexual case histories were an expression of the mischievous sense of humor lurking behind the respectable façade of the famous doctor.
Links and References
Medical Hoaxes Pranksters 19th-Century Hoaxes (1850-1900) Satirical Scientific Hoaxes
Tweet