In 1952 the political newcomer Douglas R. Stringfellow was elected to the U.S. House of Representatives as a Republican from Utah. Much of the appeal of his candidacy lay in his decorated past as a hero during World War Two, a past which he made frequent references to during his revival-style campaign speeches.

According to him, he had served as an agent of the Office of Strategic Services (OSS) during the war. This was the agency that later turned into the CIA. He claimed that at one point he had participated in a top-secret mission to rescue a German atomic physicist, Otto Hahn, from behind enemy lines and transport him to England. He also claimed that he had been captured by the Germans and held in Belsen prison, where he had been brutally tortured, causing him to become a paraplegic. He said that while lying wounded he had undergone an intense religious experience, and it was through this new-found faith, as well as the aid of the anti-Nazi underground, that he had escaped from the prison. He said that he had received the Silver Star for his services.

Stringfellow's colorful past was widely broadcast in the media. It even aired on the national television show This is Your Life. Stringfellow also frequently travelled around Utah preaching about his wartime religious experience with the blessing of the Mormon church. 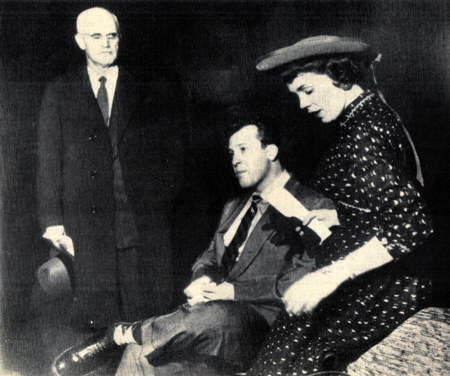 Stringfellow (seated) with his wife and Senator Watkins
in the TV studio for the taping of "This Is Your Life"
Stringfellow served one term, and was running for reelection in 1954 when his past was exposed as a fraud by his Democratic opponents. They revealed that Stringfellow actually wasn't a paraplegic at all. He had been wounded from a mine explosion during a routine mission in France, but he could walk with the aid of a cane.

Furthermore, Stringfellow had not worked for the OSS. He had been a private in the Army Air Forces, and he had never won the Silver Star. Almost his entire military career, in other words, was a fiction. Stringfellow also had claimed that he had attended Ohio State University and the University of Cincinnati, but neither institution had any record of his attendance.

When his Democratic opponents exposed him, the Mormon church ordered Stringfellow to make a public confession, which he did. He was replaced sixteen days before the election by Henry Aldous Dixon. 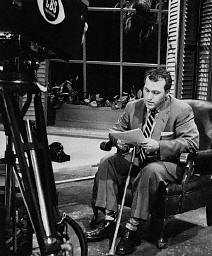 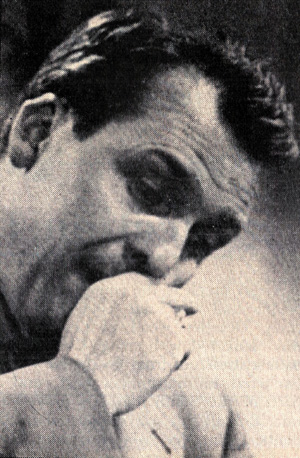 Oct. 16, 1954: Stringfellow confesses on-air that his heroic past was a hoax
Stringfellow tried to capitalize on his notoriety by going on a speaking tour, but it proved unsuccessful. He ended up becoming a radio announcer, which had been his career before he became a politician. He worked at various radio stations throughout Utah, but always used a pseudonym.
Links and References
Political Hoaxes of the 1950s Phony Veterans
Tweet