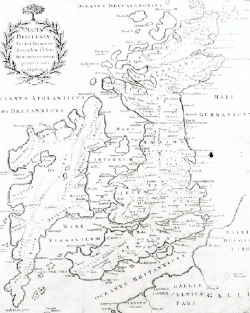 The material caused a buzz of excitement amongst antiquarians because it revealed numerous Roman landmarks whose existence had not been previously known and suggested the existence of an entire unknown Roman province. But in fact, the map and manuscript turned out to be one of the greatest forgeries of the century.

The fraud began when Bertram wrote to William Stukeley (1687-1765), a famous British antiquarian, informing him of the existence of the manuscript and map. With encouragement from Stukeley, Bertram made a "careful copy" of the material and sent it to Stukeley. The original was never sent (and never seen).

Stukeley then published a monograph theorizing that the map was the work of a 14th century monk from Westminster named Richard of Cirencester. For over one hundred years, this theory went unquestioned until the German historian Karl Wex discovered that much of the manuscript had been lifted from a variety of 16th century sources. In 1866 B.R. Woodward and J.E.B. Mayer published a more thorough debunking of the map, revealing it to be based upon "a mosaic of information collected from Caesar, Tacitus, Solinus, Camden and other authorities."

In hindsight it then became obvious that the manuscript and map were amateurish forgeries. It was only the authority of Stukeley that had lent them credence.

In the meantime, information gleaned from De Situ Brittaniae had made its way into an enormous variety of sources, including history books and maps of the British Royal Ordnance Survey. It took decades to correct all this information and finally set the historical record straight.
Links and References
Forgers History Historical Forgeries 18th-Century Hoaxes Literary Forgery
Tweet