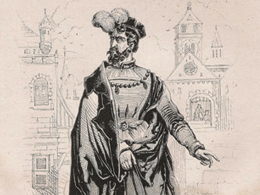 Count Jean V d'Armagnac (1420-1473) was described by a contemporary as "short and stocky of stature, even pot-bellied, but gifted with great bodily strength. His neck was short, surmounted with an acne-pocked visage, with squinty eyes, crowned by a shock of red hair."

The Count fell in love with his younger sister, Isabelle, whom he affectionately called ma mia costa (my own rib). She was said to be one of the great beauties of her time. He had two sons with her, after which he sought approval from the Pope to marry her. The Pope refused.

Undeterred, the Count bribed a papal official, Antoine d'Alet, Bishop of Cambrai, to forge a papal bull allowing the marriage. A few months later, the Count and his sister had a third child together, a daughter. The three children were known as the Bastards of Armagnac. Isabelle referred to them in public as her niece and nephews, which technically they were.

When the Pope learned of what the Count had done, he excommunicated him. Eventually the Count married another woman (not related to him).

Later the Count rebelled against King Charles VII of France, who sent an army to crush him. The army killed the Count and dragged his body through the streets. They locked his wife, seven months pregnant, in a cell with her husband's dead body. Her child (the Count's one legitimate heir) was stillborn, thus ensuring the end of the House of Armagnac.
Links and References
Forgers Legal Religion Romance Hoaxes of the Middle Ages Literary Forgery
Tweet

Your abstract calls him the "penultimate" count, but the story makes him the ultimate. Is there more to the story or did you just use the wrong word?

By the way, I just discovered this site and it is delightful.