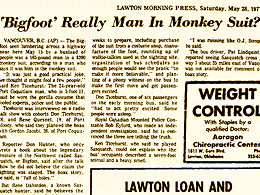 On the morning of May 15, 1977, a busload of people watched a Bigfoot cross Highway 7 east of Vancouver. But a few days later a trio of young men confessed that the Bigfoot was their work. It had taken them weeks to prepare, since they had fashioned resin-cast Sasquatch feet to make convincing footprints. They also planted a phony witness on the bus to see the Bigfoot first and get the other passengers excited. Strangely, the people on the bus described seeing a 7-foot Bigfoot with a strong smell. But 24-year-old Ken Ticehurst, who wore the gorilla suit, was only 5-foot-11 and weighed 165 pounds.
Bigfoot
Tweet