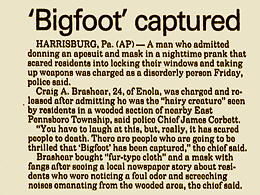 Residents of Enola, Pa. reported seeing a "hairy creature" in the woods of nearby East Pennsboro Township. One man described the creature as being hairy, 6 ½-feet tall and with arms that extended below the knees. The report created an air of panic in the town. Residents locked their windows and many took up weapons. But the panic settled after police identified 24-year-old Craig A. Brashear as the creature. He had bought an ape-suit and mask with fangs then stood in an area where his furry body would be illuminated by headlights. He did so, the police chief said, in order to "stir up more activity, to make it seem like there was a creature out there."
Bigfoot
Tweet