The Battle of Ape Canyon 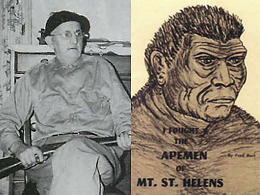 A group of miners claimed that gorilla-like creatures (which they called "mountain devils") attacked them in the woods near Mt. St. Helens. The miners retreated into a log cabin, but their attackers threw rocks down onto them throughout the night. The story was reported widely. However, a local game warden declared the story was "bunk." A search party found no evidence of any gorillas or devils. The rocks may have been the work of teenagers at a nearby YMCA summer camp who had a tradition of throwing stones down the hill. Decades later, one of the miners, Fred Beck, wrote an account of the incident titled I Fought the Apemen of Mt. St. Helens. [wikipedia]
Bigfoot
Tweet