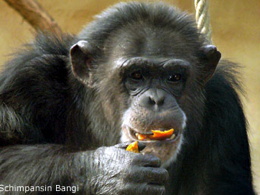 In December 2005, the German magazine Bild reported that Dr. Kajta Schneider, director of the State Art Museum of Moritzburg, when asked to identify the artist responsible for a painting, responded that it looked like the work of Guggenheim-Prize winner Ernst Wilhelm Nay, who is famous for using blotches of color. In reality, the canvas was the work of Bangi, a 31-year-old female chimpanzee from the Halle zoo. When her error was revealed to her, Dr. Schneider said, "I did think it looked a bit rushed." Banghi reportedly enjoyed painting, although her mate Satscho had a habit of destroying most of her works.
Satirical Art Hoaxes
Tweet