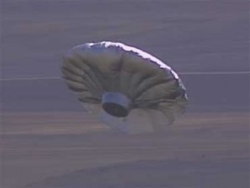 On October 15, 2009, millions of people sat glued to their TVs, watching a silver, saucer-shaped balloon float through the sky. The media was reporting that a six-year-old boy, Falcon Heene, was inside the balloon, in danger for his life as it drifted out of control. After several hours, the balloon landed a few miles from Denver International Airport, but the boy was nowhere to be found. There were fears he had fallen out.

Thankfully he was alive. The entire time he had been safe at home, hiding in a room above his family's garage. The incident turned out to have been a bizarre hoax engineered by his parents, Richard and Mayumi Heene, in an apparent effort to secure a reality TV deal. The hoax instantly became the most famous of the new millennium, symbolizing the modern world's often blurry line between reality TV, entertainment, and news.


Chronology
Thursday October 15, 2009
11:00 a.m. (approximately): The balloon takes off from the Heene's backyard in Fort Collins, Colorado. Richard Heene was an amateur inventor, storm chaser, and UFO enthusiast. He later explained that the balloon was a prototype of a floating transportation device he hoped to market to commuters. He also later claimed that the launch was accidental, as the balloon was supposed to be tethered to the ground. 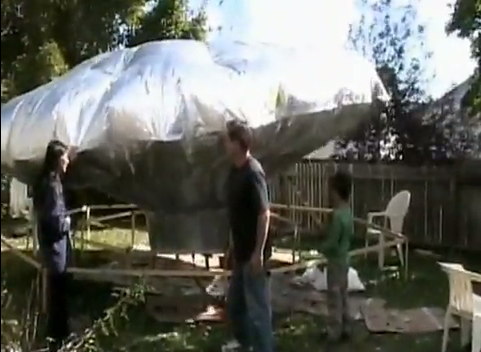 The launch of the balloon
11:15 a.m. (approximately): Heene later claimed he first called the FAA to report the accidental balloon launch, though no record of such a call is recorded. Heene then calls the local NBC affiliate in Denver, KUSA-TV, telling them that he fears his young son is inside the balloon and asking them to launch a news helicopter to track it. Initially they don't believe him.

11:22 a.m.: The Larimer County Sheriff's Department receives its first call from Heene about the balloon. Heene explains that Falcon can't be found, and that Falcon's older brother says he saw Falcon enter a plywood compartment below the balloon.

12:00 p.m.: A rescue operation has been launched, although police have no idea how to stop the balloon. News helicopters follow the balloon, broadcasting its progress live on TV as it drifts along, blown by 25 to 30 mph winds.

1 p.m.: As word of the runaway balloon spreads, the world's media fixates on it. Millions of people watch it on TV and simultaneously discuss it online. People call the Sheriff's Department with suggestions on how to bring it down, such as flying over it in a helicopter and dumping honey on it to weight it down. Flights in and out of Denver airport are rerouted.

2 p.m. (approximately): The balloon partially deflates and lands in an empty field about 12 miles northeast of Denver International Airport. It had traveled over 50 miles from the Heene family's backyard. The police find the balloon empty, but people report having seen something drop from it. A search for the boy is begun along the balloon's route.

4 p.m.: Larimer County Sheriff Jim Alderden announces that the situation has become a "recovery effort". This is a term typically used when searching for a corpse instead of a living person. But as Alderden is speaking to the media, a deputy behind him yells "They found him!" Minutes before, Falcon had walked into his family's kitchen and explained that he had been asleep in a box in his family's garage attic where he had hid, supposedly fearful his father would be angry at him for playing around the balloon earlier. When found, Falcon says, "I played and then I went to bed."

Thursday evening: The Heene family is interviewed by Wolf Blitzer on Larry King Live. During the interview, Blitzer asks why Falcon remained hidden for so long, not coming out if he heard people calling for him. Richard Heene turns and repeats the question to his son. Falcon, seeming confused, looks at his parents and responds, "You guys said that, um, we did this for a show." This statement leads to widespread suspicion that the entire incident was a hoax. 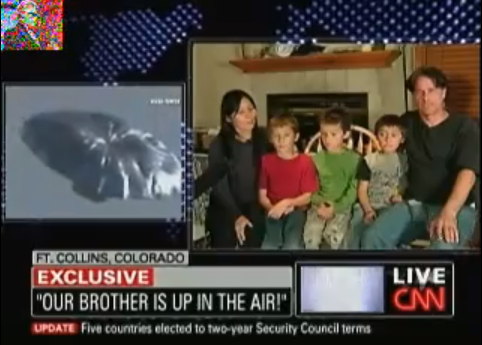 The interview on The Larry King Live Show

Friday October 16, 2009
The Heene family conducts interviews in the morning with ABC's Good Morning America and NBC's The Today Show. However, Falcon still appears uncomfortable. During the Today Show interview, he vomits as his father is asked to explain Falcon's comment about hiding "for a show". Later that morning, the Heenes stop talking to the press and post a note on their door, "Thank you for all of your support. We are not taking any interview any more. We are tired." 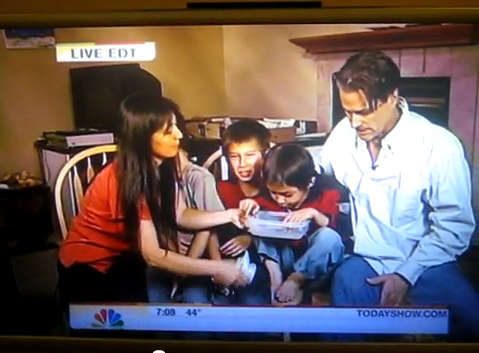 Sunday October 18, 2009
Sheriff Alderden announces his conclusion that the incident was a hoax.

Friday October 23, 2009
The court releases records indicating Mayumi Heene confessed to authorities that she and her husband faked Falcon's disappearance, knowing he was safe at home the entire time police, firefighters, and National Guard were trying to rescue him from the balloon. She told investigators the incident was a hoax meant to make the family more marketable to the media.

November 13, 2009
Richard Heene pleads guilty to a charge of attempting to influence a public servant. (Heene later claims he only pleaded guilty in order to protect his wife from possible deportation.)


Motive
Both Richard and Mayumi were aspiring actors, having met in acting school in 1997. However, they hadn't had much luck in the industry. Instead of acting, they ran a business called My You Me Productions out of their home, producing demo reels for other actors. Richard also worked as a contractor. But they struggled to make ends meet. In 2007, the family had been evicted from a rented home in Burbank, California.

Their big break came in 2008 when they were chosen to appear on an episode of ABC's Wife Swap, a show on which two families swap wives/mothers for two weeks. Viewers found the Heene's bizarre behavior entertaining — particularly Richard's behavior since he professed to believe that humans were descended from aliens and fancied himself an amateur scientist (although he only had a high-school education) because of his love of storm-chasing.

In March 2009, the Heenes appeared again on Wife Swap, this time as the viewers' choice for the show's 100th episode. Richard Heene commented, "I'm very grateful that America has voted for us to be on a second time. (It's) like the best thing that's ever happened in our life. Seriously."

His family's popularity on Wife Swap apparently inspired Richard to seek out other reality TV deals. He pitched an idea to networks for a show called The Science Detectives, which would involve him investigating the "mysteries of science". He also pitched an idea for a reality show based on his family and their lives as "storm chasers". TLC turned this down.

Faced with a cool reception from the networks, Richard apparently came up with the idea of pulling off a media stunt to generate more interest in himself and his family. A researcher, Robert Thomas, who worked with Richard to help him pitch his ideas to the networks, later told gawker.com (soon after the balloon incident) that he had heard Richard speak of planning a stunt involving a weather balloon. Thomas claimed Richard had said:


"This will be the most significant UFO-related news event to take place since the Roswell Crash of 1947, and the result will be a dramatic increase in local and national awareness about The Heene Family, our Reality Series, as well as the UFO Phenomenon in general."
Reality TV and the Exploitation of Children
The revelation that the "Balloon Boy" incident was a hoax generated a great deal of discussion about whether the popularity of reality TV was to blame for the Heene's behavior — particularly reality TV's propensity for encouraging people to engage in ever more extreme (and stupid) behavior for the sake of the camera. After all, Richard Heene apparently believed that the stunt might land him a TV deal.

There were particular concerns about the growing use (and possible exploitation) of children in reality shows. Throughout 2009, enormous media attention had focused on various "reality" families, such as the eight children in the Gosselin family (stars of TLC's Jon & Kate Plus 8), as well as the octuplets of Nadya Suleman (nicknamed Octomom by the media). Other reality shows featuring children in unique families included Little People, Big World, 18 Kids and Counting, and Table for 12.

Critics suggested that Richard Heene's use of his six-year-old son in his hoax was merely an extension of this trend. Heene recognized that a show based on his children and family was much more appealing to networks than one based on himself alone.

In the aftermath of Heene's hoax, Ruth Marcus of the Washington Post jokingly proposed "a constitutional amendment to prohibit parents from exploiting their kids on reality TV shows".

Health policy researcher Hilary Levey wrote in the journal Contexts (Spring 2010) about how six-year-old Falcon had been forced to become the reluctant star of his father's hoax (the so-called "Balloon Boy"), and of the consequences this would have for Falcon in the future:


[Richard Heene] understood how lucrative, both in terms of fame and money, family reality shows had become, especially given the Gosselins' experience. The now infamous "Balloon Boy" hoax of October 15, 2009, was an ill-conceived attempt to bring the family media attention and increase their chances of landing their own reality show. The youngest participant in the hoax, six-year-old Falcon, let the cat out of the bag on The Larry King Show. Not only will his slip, "You said we did this for the show," live on through YouTube clips, but so will his appearance on The Today Show the next morning, when he threw up on live television (some speculated out of exhaustion, while others went so far as to suggest his parents had drugged him). For little Falcon, his fifteen minutes of tears and vomit will play out forever on the Internet—all in the service of his parents' pursuit of fame and money, which instead ended in jail time.
Postscript
Since 2009, Richard Heene has continued to court media attention in various ways. In 2010 he started selling a back scratcher of his own design. He called it the Bear Scratch. Next he came up with a robotic truck-lift he marketed as the HeeneDuty Truck Transformer.

In June 2011, the Heene family auctioned off the silver balloon used in the hoax. They sought a sale price of $1 million, saying the proceeds would go to help Japanese tsunami victims. However, the auction was plagued by multiple fraudulent bids, and the balloon was eventually sold to a man in Aurora, Colorado for $2500.

In October 2011 Richard appeared in a music video as "Aluminum Man". 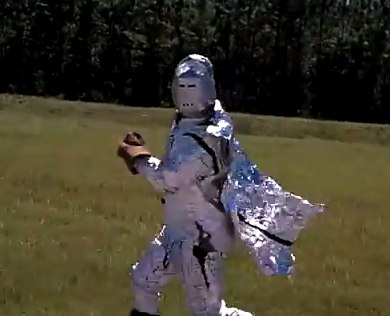 Darn you Balloon Boy!
You said it was for a show!
They now know it's staged!