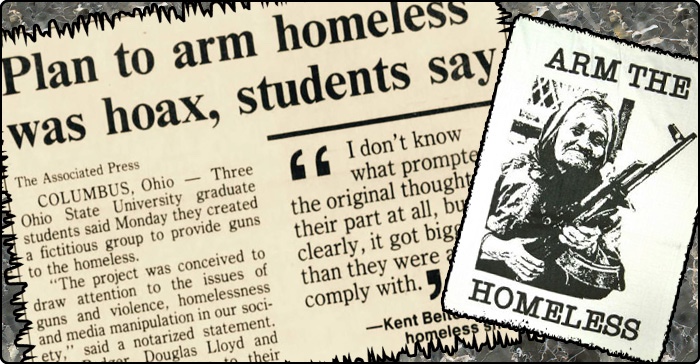 In the first week of December 1993, the Columbus, Ohio news media received a press release announcing the formation of a new charity to benefit the homeless. This sounded innocent enough, but there was a catch. Instead of providing the homeless with food and shelter, this charity would provide them with guns and ammunition. It was called the "Arm the Homeless Coalition."

The press release declared, "The Arm the Homeless Coalition will be collecting donations to provide firearms for the homeless of Columbus... Funds are to be used to provide arms, ammunition and firearm safety training for homeless individuals who pass the coalition's rigorous screening. Homeless are selected for the program on the basis of need, mental and emotional stability, and potential value to society at large." The release ended on a cheery note: "Santas will be at area malls collecting money for this vital and charitable cause."

A photograph accompanying the release showed a man in a santa suit waiting to accept donations. A sign beside him read, "100 percent of contributions will be used to provide desperately needed protection for our country's homeless." The media were instructed to address their queries to the Coalition's Director, Jack Kilmer.


Reaction
The press release immediately stirred up controversy. The Columbus Dispatch denounced the Coalition in an angrily-worded article, and the Charitable Solicitations Board of Columbus sent the organization a cease-and-desist letter, forbidding it from engaging in any fund-raising activities until it had registered with the board.

The Associated Press obtained an interview with the mysterious Jack Kilmer. In this interview, Kilmer defended the Coalition's goal of arming the homeless by asking, "Who more needs to exercise their constitutional right to have a weapon for protection?" He also noted that there were homeless organizations that dealt with shelter, food, and jobs, but none that trained homeless people in firearm use. Though he added, "We're surely not going to hand out firearms on the streets."

Kilmer declined to disclose the group's size or the location of its headquarters, saying, "We have had some hostile reaction in the past."


Criticism
That weekend, as promised, a man in a Santa Claus outfit showed up at the Columbus City Center claiming to represent the Arm the Homeless Coalition. However, he did not take donations. Instead, he passed out information about the Coalition.

But by that time the Associated Press interview had brought the Coalition to the attention of the national media — CNN, Rush Limbaugh, and others covered the story — and a storm of public criticism was gathering around the Coalition. Letters denouncing the charity poured into newspapers, and editorial columns buzzed with condemnation.

Kent Beitel, director of the Open Shelter near downtown Columbus, was interviewed, and he angrily lashed out at the idea of arming the homeless:


"What he is proposing would endanger the community. In Columbus, weapons are forbidden in all homeless shelters. People with guns would have to hide them in areas around shelters so they could come inside, in which case the weapons would be available to anyone who might come across them. This stupid thing would cause people with homes to be more fearful of the homeless than they may be now. Anyone who might want to help a homeless person would think twice if there was a possibility that person was carrying a weapon.

I'd like to have him come down here and talk to him about what the homeless really need to lower their vulnerability -- things like access to shelter, medical care, food and hygiene."
The Hoax Exposed
Meanwhile, as the battle of words waged on against the Coalition in the press, a Dispatch reporter decided to track down the owner of the post office box listed on the initial press release. What he discovered what that it didn't belong to Jack Kilmer. Instead, it belonged to an Ohio State University graduate student named Paul Badger. In fact, no record of Jack Kilmer's existence could be found.

When contacted, Badger initially insisted that Jack Kilmer was real. But a few days later, Badger and two of his classmates, Douglas Lloyd and Eric Zimmerman, released a notarized statement confessing that the Arm the Homeless Coalition was a hoax. There was no Jack Kilmer. There was only a post office box and a phony press release.

In their statement, Badger, Lloyd and Zimmerman explained why they did it: "The project was conceived to draw attention to the issues of guns and violence, homelessness and media manipulation in our society." But they went on to say they had been unprepared for the savage backlash the hoax had received.


The Coalition Lives On
This was the end of Badger, Lloyd and Zimmerman's involvement with the Arm the Homeless Coalition, but the joke lived on and began popping up in other corners of the nation.

In October 1996 it reemerged in San Luis Obispo, promoted by a man named David Gross who managed to fool his local TV station before the prank was exposed.

And in 1999 the Phoenix New Times ran a story about the Arm the Homeless Coalition on its front page as an April 1 gag. The article was titled "Give Piece a Chance." Reportedly, 60 Minutes II, the Associated Press, and numerous local radio stations fell for it.
Arm the Homeless Haiku (Submitted by Hoax Museum visitors)

In this day of multi-national corporate fascism, economic hedonism,flagrant corruption of our political system and the global pandemic of homelessness the ARM THE HOMELESS movement may no longer need be a hoax...
Posted by Wilford John Presler IV  on  Wed Feb 22, 2012  at  11:24 AM