On June 20, 1977, ITV in England broadcast a documentary titled Alternative 3. The show, presented as part of a regular series called 'Science Report' produced by Anglia TV, began with the announcer explaining that they had originally intended to broadcast a far different show, but something had gone wrong. They had intended to air a show about the British 'brain-drain', about how British scientists were leaving the country to find higher-paying jobs abroad, but in the course of their investigation they discovered that many of the scientists they sought to interview weren't just leaving the country. They appeared to be mysteriously disappearing from the face of the Earth itself. 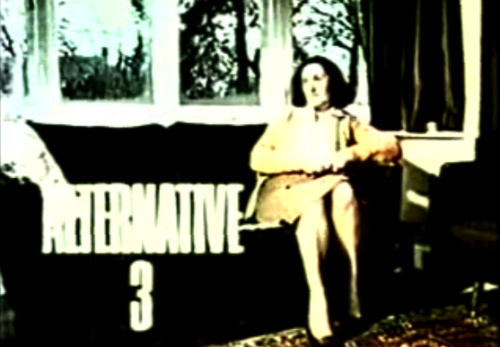 The opening scene of Anglia TV's Alternative 3 documentary
The disappearance of these scientists prompted the news team to investigate further, and what they ultimately uncovered was a vast, global conspiracy reaching to the very highest levels of the American and Soviet governments. Apparently back in the 1950s researchers had learned that the Earth, on account of man's actions, was facing an unstoppable environmental catastrophe which would result in the almost certain extinction of humanity itself. World governments were left with only three options. They were:
The reality of the looming crisis had prompted high-level officials in the American and Soviet governments to collaborate in order to make Alternative 3 a reality.

Through interviews with supposed astronauts and scientists, the documentary pieced together evidence that supposedly revealed that the Soviets and Americans, working together, had reached Mars as early as 1961, that the Apollo Space Program had been nothing but a publicity decoy to conceal the true purpose behind NASA's numerous rocket launches, and that scientists were now being abducted to work on Mars.

The stony-faced earnestness of the announcer convinced many that the documentary was real because after the show's conclusion Anglia TV was flooded with calls. If viewers had watched a little more closely, however, they would have seen that the copyright notice for the show was dated April 1—April Fool's Day (even though the show wasn't broadcast on April 1st). 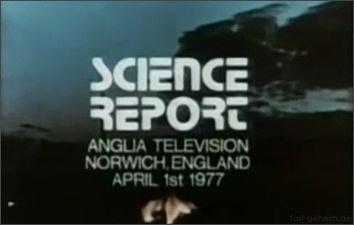 The closing credits for Alternative 3.
Note the copyright date: April 1st 1977
A few were so convinced by the show that they refused to believe it wasn't real, even after its producers announced that the entire thing had been a joke. These faithful few continue to insist that Alternative 3 is real, and that the show was part of the world government's vast and sinister disinformation scheme. They argue that by making Alternative 3 appear to be a fanciful hoax, the world government has insured that no one will suspect that it is, in fact, the frightening truth.

Proof it's possible to piece together evidence of just about anything, and once some people believe it they won't stop
Posted by Pete Byrdie  on  Sat Jun 21, 2014  at  02:05 AM
Brian Eno's great 1978 album "Music for Films" had a track called "Alternative 3." Now I know why!