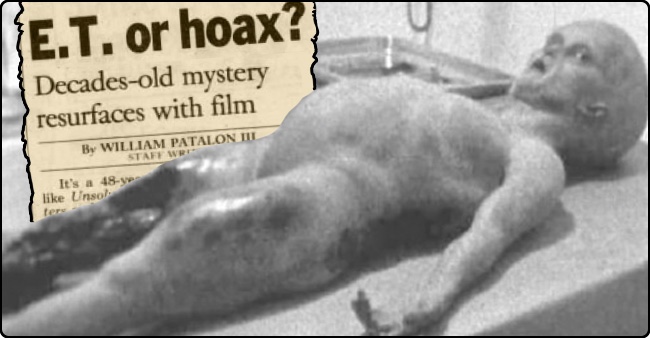 Ever since the rumored crash of a flying saucer near Roswell, New Mexico in the summer of 1947, UFO theorists had speculated that the body of an extraterrestrial had been collected from the wreckage and autopsied. In May 1995, British music and video producer Ray Santilli announced he had acquired footage of such an autopsy.

Santilli claimed he had acquired the film (22 reels consisting of 21 safety prints and one negative) from a retired military cameraman. Forty years earlier this cameraman had been assigned to record the autopsy, but unbeknownst to his superiors, he had stolen a copy of the footage. Santilli paid him $100,000 for it. Santilli later offered the following description of the cameraman:


The cameraman was in his eighties and seemed a genuine enough person. He explained that from 1942 to 1952 he worked as a cameraman for the Army Air force and special forces, that during his time with the services he filmed many events including the tests that were part of the Manhattan Project (Atomic bomb testing White Sands). He explained that on June 2nd 1947 he received an order directly from General McMullan stating there had been a crash. He was to go immediately to White Sands and film everything. The cameraman had authority over and above the on-site commander and reported back only to McMullan. The cameraman flew to Roswell then was taken by road to the site he describes as being a dried up small lake bed.
The footage subsequently became the basis for a TV special, "Alien Autopsy: Fact or Fiction?" hosted by Jonathan Frakes of "Star Trek: The Next Generation." The special was aired by the Fox network in the United States later that year on August 28. It proved extremely popular, earning the top ratings for its time slot.


The Footage
The footage, shot in black-and-white, shows the body of what appears to be a hairless (apparently female) extraterrestrial lying on an operating table. A shaky, hand-held camera follows surgeons in bio-hazard suits as they examine the body, pointing out its features, such as the creature's twelve toes. After examining it, the surgeons cut open the creature's chest and remove organs. Finally, they saw through its skull and remove the brain.


Controversy
A broad coalition of experts immediately ridiculed the footage as an obvious hoax. Physicians pointed out that the surgeons shown in the film were holding their instruments incorrectly, indicating they were not real surgeons. Special-effects artists noted that the body being dissected appeared to be made of rubber. Even casual viewers noted that the camera went out of focus every time it neared the body. Anatomist Dr Paul O'Higgins, of University College, London, commented, "To judge from the film, the autopsy was carried out in a couple of hours. Yet these were alien creatures. They represented an unparalleled opportunity to science. We are expected to believe we casually cut them up in an afternoon. I would have taken weeks to do such an autopsy."

Despite such criticisms, many UFO enthusiasts were intrigued by the footage and embraced it as evidence of a government coverup. For his part, Ray Santilli said, "We didn't hoax it - 100 percent sure."


Confession
In April 2006 a comedy film, Alien Autopsy, was released based on Santilli's story about his discovery of the autopsy footage. Santilli was the executive producer of the movie.

Shortly before the release of the movie, Sky One aired a documentary, "Eamonn Investigates: Alien Autopsy," in which Santilli admitted to reporter Eamonn Holmes that the alien autopsy film was almost entirely a fake. He revealed that the footage had been shot in a London apartment. The body of the alien was created by sculptor John Humphreys, who also played the part of one of the surgeons. However, Santilli insisted that there really was footage of an alien autopsy, but due to its poor condition he had been forced to recreate the autopsy.

Skeptics accepted his confession that the autopsy film was a fake, but dismissed his claim that there was any real footage.

Although the alien autopsy footage was widely assumed to be a hoax ever since its first release, it nevertheless became the most widely recognized representation of extraterrestrial mythology and helped to popularize the Roswell legend. It remains one of the most elaborate UFO hoaxes of all time.
Links and References
Extraterrestrial Life Movies Hoaxes of the 1990s
Tweet