A 1928 monograph written by Augustus C. Fotheringham introduced the scientific community to the curious bird known as the Woofen-Poof (aka Eoörnis pterovelox gobiensis). 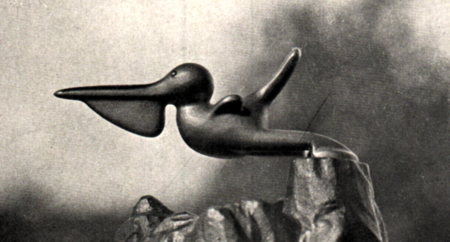 Woofen-poofs, which are native to the Gobi Desert, are approximately 17 centimeters in length, have a long beak below which hangs a pendulous pouch, and possess extremely short, semi-circular wings. Their rapid wing-beat produces a distinctive musical sound as they fly, "three octaves above middle C." Small, sandy-brown feathers help to disguise them in the desert. But perhaps the bird's strangest feature is its smooth and glossy appearance, almost like polished metal, on account of "the presence of enormous numbers of active sebaceous glands on all parts of the body."

The unusual name, "woofen-poof," appears to derive from the sound made by the creature as it alights into the air to begin flying: "a 'woof' or 'whiz' in the air, followed by a 'poof' or 'shush' made by the bird's feet in striking the loose desert sand."

Although normally placid by nature, the woofen-poof can be roused quickly to anger when it senses a threat. When angry, it flies at its opponents at high speed, using its closed beak as a deadly weapon.

A persistent rumor suggests that "Augustus C. Fotheringham" was actually a pseudonym for L.W. Sharp of the Botanical Society of America. In addition, skeptics have noted that the woofen-poof bears an uncanny resemblance to the hood ornament of an automobile.
Reference: Fotheringham, Augustus C. Eoörnis Pterovelox Gobiensis. Buighleigh Press (1928).
Tweet