The Rackabore is a kind of wild boar that, like the Sidehill Gouger, is highly adapted for walking on steep slopes because the legs on one side of its body are longer than on the other. While this provides it with a certain advantage on hills, the drawback is that it can only move in one direction depending on whether it is a right-handed Rackabore (with short legs on its right) or a left-handed Rackabore (short legs on its left). They cannot turn around. In addition, a Rackabore is quite helpless on flat surfaces. 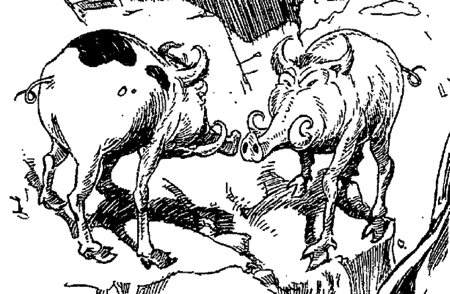 The Rackabore is a descendant of the Javelina, a piglike animal indigenous to the southwestern United States. During the last ice age some Javelinas, unable to find food on the plains, moved up into the hills and there evolved legs of different length.

Rackabores are known to be extremely stubborn. Should you encounter one, don't expect it to get out of your way. The story is often told that a right-handed and left-handed Rackabore once met on a narrow mountain pass. Neither would back up. Instead they both stood there, waiting for the other to move, until both starved to death.
Tweet

There is a sidehill hodag, the dahu,afrench sidehill ibex,the wampahoofus, which looks like aelk-gnu hybrid, as well as many other real sidehill animals.Now go back to your regular lives, dont read about tall tale creatures and remember,you didnt read anything about them being real.
Posted by The great tall-tale cover-up  on  Fri Oct 27, 2006  at  12:35 PM
As I walk round hill
Clockwise rackabore appears
Won't get out my way
Posted by J  on  Tue Nov 28, 2006  at  01:21 AM