The San Antonio Light reported that San Antonians were barricading themselves indoors after 13 lions escaped from the zoo and were "spreading terror" throughout the city. The paper's "intrepid photographer" supplied a picture of the beasts prowling loose outside of the downtown Municipal Auditorium.

The Light later reported that its switchboard operator "got over 200 calls on the lions in front of the auditorium picture alone asking whether the felines had been captured. One man wouldn't believe it was a joke, saying, 'You can't fool me. I saw the lions in the picture and pictures are one thing that don't lie.'" 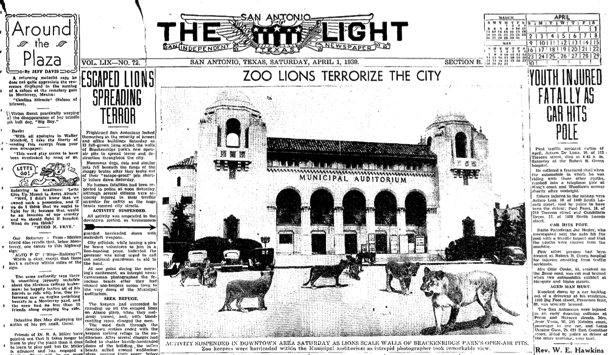 ESCAPED LIONS SPREADING TERROR
Frightened San Antonians locked themselves in the security of homes and office buildings Saturday as 13 full-grown lions scaled the walls of Brackenridge park's new open-air pits to spread terror and destruction throughout the city.

Numerous dogs, cats and similar pets fell beneath the fangs of the shaggy brutes after they broke out of their "escape-proof" pen shortly before dawn Saturday.

No human fatalities had been reported to police at noon Saturday, although several citizens were seriously injured in their terrible scramble for safety as the huge beasts roamed city streets.

ACTIVITY SUSPENDED
All activity was suspended in the downtown section as businessmen guarded barricaded doors with makeshift weapons.

City officials, while issuing a plea for brave volunteers to join in a lion-hunting posse, indicated the governor was being urged to call out national guardsmen to aid in the hunt.

At one point during the morning's excitement an intrepid news-cameraman photographed the ferocious beasts after they had chased zoo-keepers across town to the very doors of the Municipal auditorium.

SEEK REFUGE
The keepers had succeeded in rounding up all the escaped lions on Alamo plaza, when they suddenly turned, and, with bloodcurdling roars charged the men.

The mad dash through the downtown section ended with the keepers seeking refuge in the auditorium. After several charges had failed to shatter hastily-barricaded doors of the building, the sullen beasts milled around auditorium plaza, roaring their anger, before dispersing again.

Officials expressed the hope the lions would be rounded up or killed before nightfall, shuddering at the untold horrors they might perpetrate before another dawn spreads over the cowering city.

But, after all, this is April First.