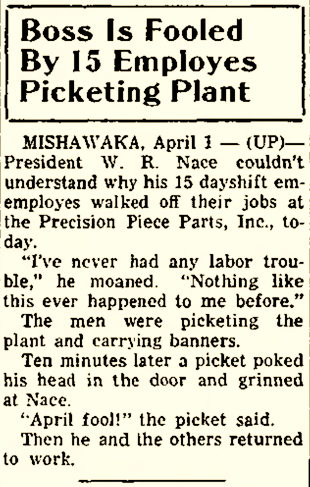 MISHAWAKA, April 1 — President W.R. Nace couldn't understand why his 15 dayshift employees walked off their jobs at the Precision Piece Parts, Inc., today.
"I've never had any labor trouble," he moaned. "Nothing like this ever happened to me before."
The men were picketing the plant and carrying banners. Ten minutes later a picket poked his head in the door and grinned at Nace. "April fool!" the picket said. Then he and the others returned to work.

Context: in April 1953, thousands of AFL and CIO union members really were staging strikes. The biggest walkout occurred at a U.S. Rubber Co. plant in Mishawaka, Indiana, where some 4200 workers left the job after a breakdown in wage negotiations.
April Fool's Day, 1953
Tweet