The Madison Capital-Times ran a picture on its front page showing the dome of the Wisconsin State Capitol collapsing. A headline announced, "Dome Topples Off Statehouse," while the subhead read, "Officials Say Legislature Generated Too Much Hot Air." 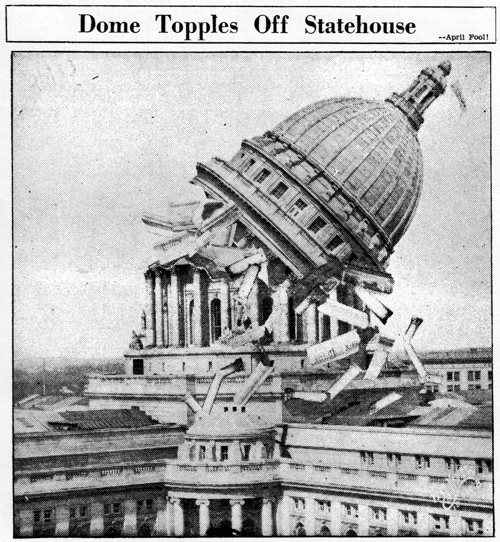 "When the sixth of a series of mighty blasts toppled the capitol dome from its supports this morning, a Capital Times cameraman arrived just in time to snap this unusual and sensational photograph of the mass of granite and steel as it fell. This remarkable action picture shows the pillars and blocks of stone as they hurtled to the ground when the dome collapsed. This picture was taken looking toward the W. Washington ave. entrance of the capitol."
The accompanying article reported that "Wisconsin's beautiful $8 million capitol was in ruins today, following a series of mysterious explosions which blasted the majestic dome from its base." The explosions were said to have begun at 7:30 AM, followed by smaller blasts that "sent showers of granite chips down upon the heads of pedestrians." Three large blasts finally finished off the dome, though luckily no one was seriously hurt. The article added, "Authorities were considering the possibility that large quantities of gas, generated through many weeks of verbose debate in the Senate and Assembly chambers, had in some way been ignited."

Despite the fact that the story concluded with the words "April Fool," many readers were upset. One reader wrote to the editor, "I was filled with indignation over your April Fool joke on the front page of the Capital-Times of April 1. There is such a thing as carrying a joke too far and this one was not only tactless and void of humor, but also a hideous jest."

The photo and story were the work of photographer-reporter Cedric Parker. In 1985 The Science Digest named this one of the world's best hoaxes.

Wisconsin's beautiful $8,000,000 capitol building was in ruins today, following a series of mysterious explosions which blasted the majestic dome from its base and sent it crashing through the roof of the east wing.

At 7:30 this morning the first mighty explosion occurred, rocking the dome and shattering windows throughout the city. This was followed immediately by two lesser blasts, which sent showers of granite chips down upon the heads of pedestrians.

More Detonations Follow
After an interval of about 2 minutes, three more detonations followed in rapid succession, shattering pillars and toppling the dome from its supports. Huge blocks of granite were tossed into the air like feathers.

With the sixth and final blast, the huge dome caved in on the east side, and the heavy mass of stone and steel collapsed. Falling in an arc, the dome split into a dozen parts as it struck the east wing roof, which was crushed like a cardboard box.

The wing was demolished into a heap of crumbled stone, into which was mingled the shattered granite blocks and pillars of the dome.

Hundreds of pedestrians and motorists about the Capitol square miraculously escaped death and serious injury as the heavy missiles hurtled through the air to the streets below.

Granite chips were thrown through a score of store windows, and a heavy pall of dust and smoke hung over the square after the explosions.

Quency Many Fires
A major catastrophe was prevented when all six Madison fire companies arrived on the scene, putting out the dozens of small blazes which followed the explosions in various offices throughout the building.

More than 1,000 lives were saved due to the fact that the explosions occurred early in the morning before state employees at the capitol had come to work.

After police had ascertained that no one had been killed or seriously injured, an investigation of probable causes for the series of explosions was started immediately.

Eye Solons
Authorities were considering the possibility that large quantities of gas, generated through many weeks of verbose debate in the senate and assembly chambers, had in some way been ignited, causing the first blast.

It is believed the other five blasts were indirectly caused by the first, which set off excess quantities of hot air that had seeped from the assembly and senate chambers into other rooms in the building.